The Road to Del Rio XII: From Wandering Bluesman to Corporate Singing Cowboy


Just as Herbert T. Barrow might be the last man in the world to see the face of God in anything, even when staring God himself in the face, he is also the last man in the world to see himself existing anywhere on a corporate ladder. He's just a wandering bluesman, playing streetcorners and saloons to anyone with a nickle or dime to put down. True, at the moment, he's found himself a nice little $5-a-day radio gig shilling laxatives and singing cowboy songs over the Mexican Border Blaster, XER, but that's all it is. Every day he rides a taxi across the border into Mexico, does his show, collects his five bucks, rides the taxi back to Del Rio and that's pretty much that. 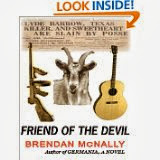 When Part II of Friend of the Devil opens,  Herbert is standing in the local offices of his employer, the Royal Consolidated Chemical Company, summoned by Christine, the imperious, just-out-of-secretarial-school receptionist and so far, the only person from the company he's ever actually met. She tersely informs Herbert, that from now on, he is to submit for review a playlist of the songs he's going to sing five hours before each day's show. This strikes Herbert as odd, since up until now no one from the company has shown even the slightest interest in what he does on the air. In the world of border-blaster radio, only one thing matters; how well a performer can "pull mail." A singing cowboy might well be the best yodler on the planet, but unless he can persuade listeners to order products and send in money, he's useless to them. Apparently Herbert, or 'Cowboy Slim Gatlinburg,' as he calls himself, pulls in mail just fine. Though Christine invokes the name of their never-seen boss, Mr Klingman, Herbert guesses it's merely something she's concocted to exert control over him and other would-be minions. Instead of writing anything down, he reels off a list of made-up song titles, and before she can say anything, Herbert bids her a good day and leaves.

Once outside, standing in the bright Texas sunshine, Herbert sees it's noon and time for lunch and strolls over to the Tastee Diner for a bite. Along the way, he greets people on the street he knows. At this point Herbert has been living in Del Rio about three months. Things have been going well for Herbert, so well, he's almost allowed himself to forget the craziness he'd gone through riding with Bonnie and Clyde, being pursued by Texas Ranger Captain Frank Hamer, as well as a band of fortune hunters and always with God and the Devil nearby, watching over it all, and betting on what they think Herbert might do next. But as tempting as it might be to dismiss it all as nothing more than a very bad dream, Herbert knows with complete certainty that these last three months of peace are nothing more than a between-the-rounds respite and that it's just a matter of time before Mr. Stevens and the Other Guy start it all up again.

Little does Herbert realize that the clockwork, corporate and celestial, has already started turning around him.

Following is an excerpt from Friend of the Devil, available on Kindle.

“What do you want, Mister Stevens.”

“Besides that song, nothing much. Wanted to say hi and to tell you there’s no hard feelings and that, you know, I still owe you a favor, anytime you might want to collect on it.”

Stevens frowns. “That guy? Are you talking about God?” The way he says it suggests he half expects the man might come suddenly and smite us both silly.

Stevens chuckles. “Well, you know, he has lots of names.” He fingers his beard reflectively, then adds, “but don’t we all?”

“Oh, we’ve always got a bet going over this or that. The fate of the world can be such a complicated thing.”

“Plus the side bets.”

“And so that’s where the real action is, isn’t it?”

“Does he understand that?”

“Hey!” Stevens rolls his eyes as might a young girl. “I have no idea,” he says. “When somebody’s eye is always on a bunch of sparrows, it’s hard to tell what else they might or might not understand.”

I don’t say anything. He looks like he’s about to leave. But then he turns back and asks, “So, are you going to sing my song or not?”

“You said it yourself, man pays the money, so it’s his song,” he says.

Posted by Brendan McNally, author of "Friend of the Devil," and "Germania" at 5:53 PM