Speer Escapes Berlin, Then Flies Back

Along the shores of Eutin Lake, in the vast refugee encampments that had sprung up there, Speer’s Ministry for War Production started to reconstitute itself. People from the different departments and sections began finding each other. Then they’d brought their tents and trailers together and started inventorying the files and equipment that made it out.

The drive out of Berlin had been a nightmare. Naturally, the order to evacuate came late. Ten thousand private vehicles which had been kept hidden and fully fueled for several years suddenly reappeared and converged on the one open road heading north. Everyone who could get exit papers: party fat cats, ministry bureaucrats, wealthy businessmen and military officers, along with their families and prized possessions, were all trying to pull rank and cut each other off. And just as suddenly, swarms of enemy aircraft came out of the clouds, strafing them with machinegun fire and dropping bombs. And then there were the checkpoints where stern-faced militiamen would examine their documents and send them back whenever they felt like it. It was hell. Getting to Schleswig-Holstein usually took only four or five hours, but with the traffic jams and blown up bridges, it had taken three days. But somehow in spite of it all, Speer and the others had managed to get out. 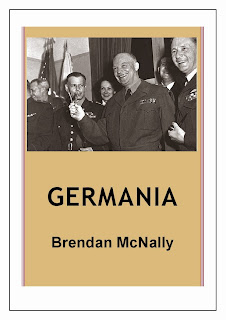 Surveying the scenery around him, Speer wondered whether things might actually start getting better now or whether this was merely the last moment before everything slid into complete chaos. People were walking around with the vague sense that if they looked hard enough they’d find there was someone running it all, that sooner or later, a bunch of trucks would show up and dig some regulation latrines or a field kitchen and someone would blow a whistle and gather everyone together to make announcements. But instead, there were only the militias and military police, whose involvement with them ended once they stopped moving from place to place.

Speer had spent the afternoon meeting with his deputies over what their priorities should be for re-establishing contact with different factories and power plants once the fighting was over. Some argued that since they were unlikely to get any guidance from above, they should take over the functions of the different industry and transport ministries to reduce any overlap. In the end, no decisions were made and they simply agreed to wait and see how things turned out.

Walking away from the lakeshore, Speer endeavored to find some solitude. He began heading across the fields toward a nearby wood. The encampment seemed to go on forever, everyone with their plot carefully staked out, guarding it as much from their neighbors as from strangers. Women tended fires, men fiddled with automobile engines and camp stoves. Everyone acted peaceful, but the tension was unmistakable. Not knowing what would come next was weighing on everybody. People couldn’t decide whether to eat all their food at once or ration it out and risk having it stolen. Having gotten this far, nobody had any petrol left and they worried that should there be an order to move, they’d have to ditch their cars. You could no longer tell who anyone was. On the trip up, all the Nazi Party officials wore their uniforms so that no one would dare bother them. But now, they’d put them away so that aside from their ample bellies, they’d look no different from anyone else.

Eventually he did get past the endless campground and found his way into open fields where there were no people about. Springtime had come to northern Germany. The grasses in the field were already getting long and there was a host of violets, daffodils and primroses among the stone walls and hedges separating the fields. Speer was glad to be finally by himself. Having so many of his underlings there from the Ministry, looking to him for direction, made Speer uneasy. He didn’t have contact with anyone from the administration of the Northern Zone. He knew that Admiral Doenitz was running it and he should report to him and see what he could do.

Most troubling thing about the camp was having Manni back. Strange as the Ruhr had been, once Manni had gone, Speer quickly compartmentalized it to the point where it no longer mattered that Manni had been an enemy spy and assassin or that Speer had unwisely confided in him. But having him back with him here in Eutin, hovering among his staff, his presence was jarring. But even so, Speer still found himself slipping back into the old routines. The other day Manni had come up with the juggling balls. Speer could have offered some excuse, told Manni he was busy, that he didn’t feel like it, but instead he nodded and they went at it. It started with the usual patter, then Manni bluntly asked him; “Any news from your friend?” Speer shook his head and Manni didn’t bother asking him anything else.

“My friend,” Speer said aloud to the trees and the grasses. He thought about the party and how in the end he’d walked out without even talking to him. He should have tried harder instead of just standing there, cloaked in his aloofness, waiting for Hitler to make the move. But neither did and now Speer was here and Hitler was in his bunker, surrounded by those horrible people. I was Hitler’s friend, probably his only friend, but when the time came, and I walked out on him.

Speer suddenly realized he was crying.

He came upon a road that cut across the field, and rather than continue on to the woods, he started up it. After a few minutes he saw small airplanes taking off and landing further ahead and realized there had to be an airfield somewhere nearby. He picked up his pace. Then a Volkswagen kubel drove up to him and stopped. Two military policemen with submachine guns stepped out and asked him what he was doing there. Speer showed them his papers and they offered him a ride to the airfield. Most of the aircraft that were landing had just flown out of Berlin, they told him.

They left him off outside the operations hut. Speer went in and asked to speak to whoever was in charge. A weary-looking Luftwaffe colonel came forward. “Yes, Herr Reichsminister?” he asked.

“Can you fly me into Berlin?”
(An excerpt from Germania, first published in 2008 by Simon & Schuster, now also available on Kindle here).
Posted by Brendan McNally, author of "Friend of the Devil," and "Germania" at 6:07 PM