And I turn around to look at the two guys who’d popped out in front of me and they’re both now frozen in mid-leap, their weapons hovering in the air a few inches from where they tumbled out of their hands.

What in the shit is going on?” I ask aloud. What I get for an answer is the complete silence around me. Everything, everything is frozen still, not even a hint of movement anywhere. I could be walking around inside a photograph. I walk back and stare at Hamer firing his BAR at where I’d been standing, and apparently not even caring about the two plainclothesmen facing me. Look at that hateful scowl he’s got on his mug. I had my hands up and he still tried to shoot me in the back and with a BAR. What a dog! What a complete fucking beast! Makes me wonder how many of them notches he got on his gun was from shooting unarmed guys with their hands up and then lying about it?

I yank the BAR from his hands, then point it back at him, curling my finger around the trigger, and telling myself I’d be completely within my rights if I killed Hamer right now.

But I don’t kill him. Because I already killed my last man. That’s what I told myself back in France, that I’d done killed all the people I was ever gonna kill and that even a murderous bastard like Hamer ain’t changing it. 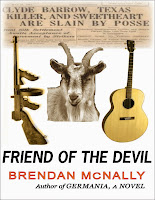 Still, I’d like to take the rifle butt and smash in his face a little, but I don’t. That’s not how we do it in West Dallas. Instead, I try taking my anger out on the bullets, batting them with the rifle butt, but to my surprise, hard as I swat them, they hardly budge at all. So instead I rip the clip out, empty the magazine and then, holding it by the barrel, I smash it hard against the ground, shattering the stock, the receiver and the bolt. Then I toss it aside, and go over to the two guys who are leaping aside and pluck their rifles from the air, but instead of smashing them against the ground, I just spend the next few minutes going completely crazy, attacking their cars; smashing the windshields, the headlights, radiators, carburetors, slashing the tires.

Finally, I’ve had enough. I toss the broken rifles aside and just stand there trying to catch my breath. That’s when I hear the music playing. It’s coming from a radio inside the store; one of those hillbilly family quartets they have singing on the border blaster:


"Just a few more weary days and then,

I’ll fly away, fly away

To the land where joys will never end,

I’ll fly away, fly away.

When I die, halleluiah by and by,

It makes me happy that while time might be standing still here, somewhere down in sunny Mexico reality goes on just like it always does.