I stumble up the street, feeling like my eyes just been ripped out, and the whole time I got that dang song going through my head:

So they got ‘em. Poor Clyde, poor Bonnie, poor stupid bastards. It’s not that I’m in the least bit surprised, or that I’m not massively relieved it was them that got killed and not me, but even so, I’ve now got an emptiness bellowing inside me that don’t want to let go. For a while I just wander the streets, like I got them alive in front of my eyes, so alive, so crazy, like they was gods from the old times. But now they’re dead, dead, dead, and poor dumb mortal me is still alive. 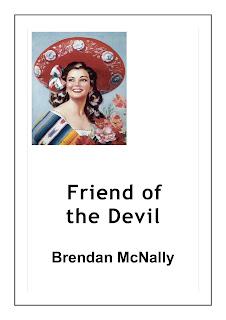 Knowing I can’t wander the streets forever, I go into the Tastee Diner and order a blue plate special. They got the radio on with the usual worked-up preacher endlessly going on about Salvation and the Blood of the Lamb and his address, Box-435-Del-Rio-Texas. I keep waiting for someone to cut in and make an announcement, but twenty minutes and seven or eight Box 435s later, he gets replaced by another screaming preacher and I actually start half-believing it might all have been just crazy-girl talk. But then it dawns on me that, this being Dr. Brinkley’s station, they simply don’t broadcast news. So I stay on my stool, not really thinking about much of anything, just waiting for word to come, knowing it’s just a matter of time before it does. The counterman comes by and refills my coffee; I’m about halfway through it when the door opens and someone comes in shouting, “Did you all hear? The Barrow Gang’s been killed in an ambush!”

For the next few seconds it’s like this deep quiet sets in, as if, for that one moment, none of them actually believes it. But then the vacuum breaks and as the air rushes back in, I see their faces going off like they’re fireworks, some of them angry, some disappointed or glad, followed by a rumbling of voices, like we’re standing at their graves, with them already laid deep into the ground, and it’s time to offer final words, before the earth gets covered on them and we all walk away and get on with other things.

"Well, they had a good long run. Nobody expected them to last long as they did,” says one.

"They must’ve knowed they wasn’t going to get away forever,” says somebody else.

"Mean as snakes, both of them!”

After another minute or two, the topic has moved on to something else. I finish my coffee, pay my bill and go. A half hour later, I find Hector, ride the Tijuana Taxi across the border, do my show, collect my five dollars and then head back to Del Rio.
(Excerpt from Friend of the Devil," available on Kindle)
Posted by Brendan McNally, author of "Friend of the Devil," and "Germania" at 11:50 AM No comments:

Outside in the corridor, someone was approaching. The door opened and General Strong stepped in. “General, we’re ready to begin,” he said.

Jodl nodded. He reached into his jacket’s inner pocket and took out something which he then fixed into his eye. A monocle! Jodl now looked like a Prussian played by Erich von Stroheim. What was he thinking? Did he somehow consider it vital that Germany be represented in her darkest hour by a walking caricature? Perhaps he was angling for a post-war career in Hollywood. From what Ziggy had heard, plenty of German and Austrian Jewish refugees had found lucrative careers playing Nazis in films. Jodl was the real thing. Why shouldn’t he get some of it?

"Ready?” asked Jodl. Seeing everyone nod, he said to them: “Gentlemen, this is a black day for Germany, but I promise you, we will survive!”

I wonder if Eisenhower will be there,” von Friedeburg mumbled aloud to himself. 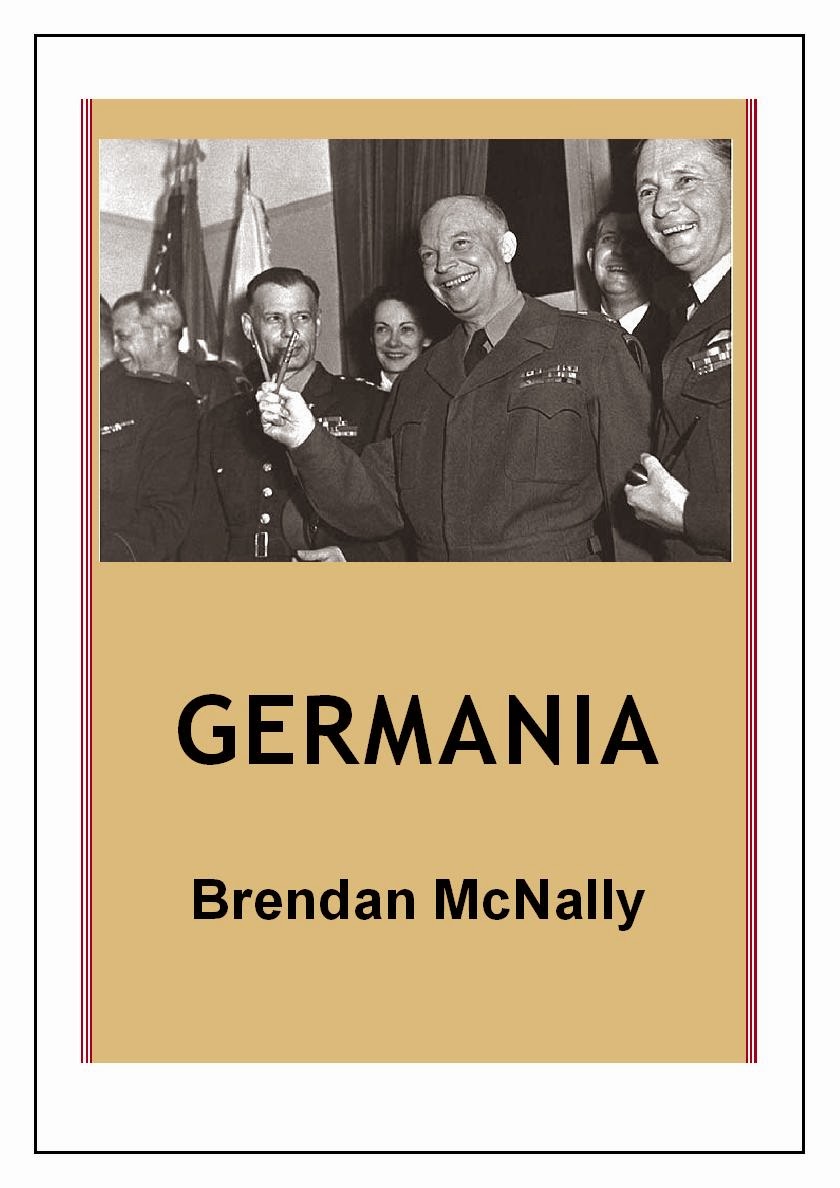 They walked down the corridor in single file, past the staring soldiers, General Jodl first, followed by Major Oxenius, then Admiral von Friedeburg, then Ziggy.

They were brought into a crowded, map-filled room, at the far end of which, under the glaring light from a bank of movie-studio floodlights, was a large rectangular table. Sitting there facing them were nearly a dozen British, American, and Russian generals with Bedell Smith at the center. Ziggy examined the faces of the other Allied generals, but none of them looked anything like Eisenhower. On the other hand, he noticed Suslaparov glaring at him, this time not as though they were best friends.

They took chairs on the near side of the table. Bedell Smith gestured to an aide, who brought Jodl a document. Scowling, Jodl examined it perfunctorily and then scribbled his signature onto it before passing it to von Friedeburg, who did the same. The document then went to Bedell Smith, then to a British general, a French general, an American, and then Suslaparov, all of whom added their signatures to it. Then another copy of the surrender made the rounds, followed by another and another and another.

When all the copies had been signed, Jodl raised his hand. “General, I would like to say a word,” he said.

"Yes, of course,” said Bedell Smith, sounding nicer than he had in any of their previous encounters.

Jodl stood up and began addressing everyone in the room. “General, with this signature the German people and the German armed forces are, for better or worse, delivered into the victor’s hands. In this war, which has lasted more than five years, both have achieved and suffered perhaps more than any other people in the world. In this hour I can only express the hope that the victor will treat them with generosity.”

Then they were marched out. The war was over.

(Excerpt from Germania, Simon & Schuster, 2008, Kindle version available here).
Posted by Brendan McNally, author of "Friend of the Devil," and "Germania" at 10:43 AM No comments: