The Road to Del Rio XIII: Mommy, Where do Gods Come From? What's a Moonchild?

When atheist doper-bluesman Herbert arrives in Del Rio, he quickly falls into a new life as a singing cowboy on border blaster station XER. He starts to think he may finally be free from both God (the Other Guy) and the Devil (Mr. Stevens). But the fact is, all he's really done is step into a hotbed of alchemy, magic, and, ultimately, god creation.

Friend of the Devil may be set at a time and place where just about everyone is Christian, but the Judeo-Christian sensibility almost never enters into the picture. It doesn't even matter that the characters include two guys who are probably God and the Devil, this story runs completely outside that perspective. Similarly, everything going on in the story with Stevens and the Other Guy is also a couple steps removed from what we know from the Bible. Sure, Mr. Stevens is most certainly Satan himself, but then Old Scratch is always pretty much the same character regardless of whatever name or cultural context he might be inhabiting at that particular moment. What's different about Stevens is how for the Lord of Darkness, he's not exactly on top of his game. When Herbert first picks him up hitchhiking, the first thing he does is begin whining about the bad day he'd been having. He's ten hours late for a midnight meeting with someone at the Crossroads. He's evil, he's crafty, but at this point he's also pretty much of a fuck-up. 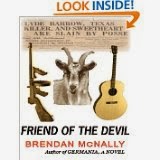 By the same token, the Other Guy certainly seems analogous to God, but after you get to know him a little, it becomes obvious that whatever resemblence he might bear with the Christian deity is, at best, circumstantial. Sure, he's not evil, but his essential goodness has largely been watered down by a sense of indifference. By now, just about the only thing that holds his interest is his ongoing good-versus-evil wagering with Stevens. He and Stevens are both some pretty tired gods. Moreover, he tends to get fairly irritated whenever he finds himself being mistaken for the God of Israel. It shouldn't be hard to figure out that while the Other Guy might be a god, he ain't God.

At the radio station, Herbert meets Rose Dawn, one of XER's star personalities. Rose is a clairvoyant with supernatural powers and, in fact, may or may not be a god herself. What Herbert realizes is that she is being used by her husband, the Great Koraan, who is in cahoots with Stevens and Dr Brinkley, to produce a "moonchild;" an alchemical creation; a man-made god.  As much as Herbert refuses to believe in any of it, he also knows it's up to him to stop it.

“Why do you always call him that?”

“It’s not his real name. It’s a stage name, for cats’ sake. His parents didn’t call him that, did they?”

She looks surprised and troubled, like the question had never occurred to her.

“Don’t you have any pet names for him? Korrie? Snookums?”

She shakes her head. “Why, of course not, it would be disrespectful.”

“He isn’t just a man. The Great Koraan just happens to be the greatest living entity in the universe.”

“Well, yes, everybody knows that.”

“You don’t count,” she snaps. “You’re an atheist. You see all the miracles of existence going on right in front of your eyes and it doesn’t make any difference to you.”

“You got that right, Toots.”