In Admiralspalast Dressing Room, Nazi Party Fatboys Lay Down the Law on Betty Boop and Bosko

“Boys, I’d like you to meet my new friends,” Gustav Loerber said. “This is Gauleiter Gunderson and Gauleiter Boehm. Sirs, may I present my sons Ziggy and Sebastian Loerber.”

Ziggy and Sebastian both snapped into bows, then snapped back up and extended their hands to the eager gauleiters.

“So where are the others?” asked Gunderson. “Where is Manni and Franzi?”

Gustav looked at his two sons and wondered why the question hadn’t occurred to him. “Where are they?” he asked. 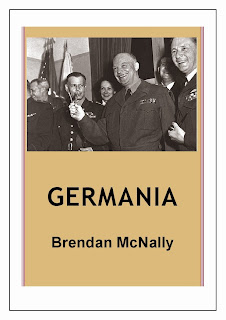 “I’m afraid they’ve been kidnapped by some of the Tiller Girls, father,” Sebastian said quickly. “Isn’t that right, brother?”

Both gauleiters let out a laugh. “Hah! That’s good,” said Gunderson. “Perhaps we should organize an assault team to rescue them, what do you say to that, Maestro?”

Gustav grinned. Good idea, but first, business. “Boys,” he said. “I’ve invited these gentlemen to meet you because they have a message for you from the Fuhrer himself.”

Sebastian and Ziggy each clapped a hand on their throats. “A message from the Fuhrer?” they gasped.

“That’s right,” answered Boehm. “Though the Fuhrer wanted it delivered to all four of you, I think we can do it right now, since it mainly concerns Herr Sebastian here.”

“Me?” asked an impossibly delighted Sebastian.

“I just can’t believe how much you two look alike,” said Gunderson. “Gustav, how do you tell them apart?”

Gustav Loerber smiled graciously. “It helps to be magical.”

The two gauleiters laughed. The fact was the gauleiters were themselves nearly identical; both fat and bald with comb-overs and meek little mustaches cowering from under their noses. Once, they both might have been fighters, but that had been a long time ago. Now all they wanted was to eat good food, drink French champagne and have someone pretty play with their dicks.

They looked at the two smiling young men, attentive in their chairs. Gunderson nodded to Boehm. Boehm cleared his throat and began. “First of all, the Fuhrer greets you and invites you four wonderful boys to add your magic to the National Socialist Revolution. He wants to assure you that you will have complete artistic freedom to create new variety pieces.”

Then Gunderson spoke. “And the Fuhrer would like to commission Sebastian to compose a special dance composition for the show. He said to feel free to make it as abstract as you’d like. The Fuhrer has personally told me that he loves your avant-garde work the most. Do you think you can do that, Sebastian?”

Sebastian smiled. “Please tell the Fuhrer I am honored.”

Both gauleiters smiled. Good. The Fuhrer would smile.

Boehm raised his finger. “The Fuhrer was also wondering if any of you’d ever thought about studying architecture.”

Ziggy stepped in. “Well now isn’t that amazing! We were just this minute talking about the subject and we both agreed that architecture is the greatest of all possible professions. Isn’t that right, brother?”

Then Gunderson’s gaze fell on the line of figurines at the bottom of Ziggy’s mirror. His smile faded. He jabbed his finger at the tiny big-eyed flapper with the garter on her thigh. “What is this then?”

“I know they are characters from American cartoons, young man. The real question is what do they represent? In your youthful idealism, you are probably thinking Betty Boop merely represents a free-spirited flapper and Bosko a funny animal, and therefore equally innocuous.”

“Sadly no,” said the gauleiter. “In truth, Betty Boop and Bosko each represent a cleverly disguised attack on the purity of our Aryan youth and our Aryan culture. Why? I am sad to be the one to inform you of this, but you must understand that Betty Boop is first and foremost, a Jewess. Yes! And Bosko, he is not a funny animal at all, but represents a little colored person! And so both represent degeneracy and disease. You must get rid of them both. Mickey Mouse can stay!”

He held out his large hand and waited as Ziggy handed over the unwholesome figurines. “I am very sorry,” he said, looking contrite.

The door opened and in came Franzi and Manni, both wearing overcoats and looking startled. But then Sebastian and Ziggy went into action, making introductions, getting them to agree to helping the Fuhrer any way they could and then everyone smiling and laughing and shaking hands.

Gustav Loerber gestured at his guests with an upraised thumb and forefinger. “A little drink, perhaps?”

The two gauleiters nodded and giddily exchanged glances as Gustav started over to the cupboard. Manni and Franzi shot Ziggy an alarmed look, like they already knew what was inside.

Gustav pulled open the cupboard door. Inside was Frau Lachmann, trembling wild-eyed, her bloody mouth gaping in fear. But somehow neither Gustav nor the others noticed her. He reached in past her and took out a bottle and tray of small glasses. Then he closed the door.

As Gustav began pouring schnapps into the glasses, Franzi and Manni looked over at Sebastian and Ziggy. Suddenly they all grinned.

The three fat men held aloft their glasses. “Gentlemen,” declared Gustav. “To our Fuhrer and success!”
(Excerpt from Germania, first published by Simon & Schuster in 2008, now also available on Kindle here).
Posted by Brendan McNally, author of "Friend of the Devil," and "Germania" at 1:24 PM