The Road to Del Rio IX: Only One Thing to Do When the Media Keeps Getting It All Wrong


For about as long as anyone can remember, bandits and other roving outlaws maintained a symbiotic relationship with the media. The outlaws enjoyed the recognition and having their exploits celebrated in dime novels and popular ballads of the day, while the balladeers and publishers liked having content that the public was willing to fork over money for. Also, being held up and robbed by someone you've already heard about is a far headier experience than getting robbed by total unknowns. With the former, you're actually getting something for your money.

So it was with the Barrow Gang. Bonnie and Clyde loved being in the spotlight. They loved having the public look up in awe at them even as they were being robbed. It almost didn't matter knowing it would just be a matter of time before their fate would catch up with them and they would go down in a hail of lead. Being objects of public adoration seemed to make it all worthwhile.


The problem with the media is they aren't always easy to control, expecially when you're out on the road and without any means of controlling the spin. Before Herbert T. Barrow fell into their clutches, Bonnie and Clyde's fortunes were fast fading. Bonnie had been badly wounded in an earlier shootout and even though she'd been convalescing for several weeks, it was obvious she wasn't actually getting any better. The time they'd spent hiding out was time away from the public eye, which also meant the public was now on the verge of completely losing interest in them in favor of someone newer and fresher. But once they got back on the road, this time with Herbert, on a multi-state crime spree, all that changed. They were immediately catapulted right back to the top and that was something they liked very much.

But as their star continued its ascent, Clyde began finally understanding the price that it was coming at. Having Herbert suddenly being seen as the outfit's new mastermind definitely put Clyde's nose a bit out of whack, especially since, as far as Clyde was concerned, his elder cousin was just some damn goody-goody malingering pacifist, who kept acting like he was too good for them. Worst of all were his bullshit reasons for refusing to carry a piece when they were sticking up a grocery store. All he would consent to doing was carry the crippled Bonnie in and out of stores when they were holding them up.

For several weeks the trio drive all over Missouri, Arkansas and Oklahoma, knocking over gas stations and grocery markets. At first the take is pretty decent, but by the end it mostly dries up, most of the places they hit don't seem to have more than five or ten bucks in their cash drawers. That's digging into Clyde bad enough, but now there are all these reports on the radio of some bizarre incident in Arkansas a month earlier where Herbert spectacularly turned the table on Texas Ranger Captain Frank Hamer and his posse of G-Men. Clyde figures that as long as he's got Hamer's gun in his possession, there has to be some way he can get himself written into the story. He figures the most efficient way to do this is to kidnap a cop and tell him all about it himself. 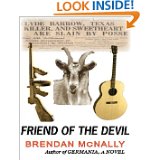 Following is an excerpt from Friend of the Devil (available on Kindle here):


“Got something here I want to show you,” he says to the cop in a confidential voice. Taking out Hamer’s .45, he pops the magazine out of the butt and into his hand, and ceremoniously presents the pistol to the cop so he can examine it. "Now tell me if you recognize it.”

The cop examines the pistol for nearly a minute before exclaiming in surprise. “Why, this is Old Lucky! How did you get it?”

Clyde’s grin widens. “I, ah, shall we say, borrowed it from Mr. Hamer in that little deal last month in Arkansas. But did the papers even report it? No, sir, they did not. Now what I’d like you to do, my friend, is when you get back, let the world know everything you’ve seen here today. Tell them the truth. That’s all I ask.”

“Yessir, I’ll do that,” says the cop, relieved that he’s not going to be killed.

“Everything they’ve said about that incident is a complete lie,” continues Clyde.

“Good,” says Clyde. “Now, in a little while, we’ll be letting you go. Just remember what we agreed and your debt to us will be settled and everything will be jake.”

The cop pauses like he’s got something weighing heavily on him.

“Something on your mind, officer?”

“Well, sir, it’s just that recently there’s been all kinds of talk within police circles about that whole Arkansas incident. They’re saying now all the initial reports that got into the papers were all hogwash.”

“Oh?”
“To begin with, they’re saying now they don’t think you and Miss Parker were there at all, that everything that happened there was all Mr. Herbert T. Barrow’s doing.”

Clyde looks dumbfounded. “They think Booger here did all that by himself? That’s nuts!”

“Dang it! Boy dudn’t even fucking know how to use a dang gun.”

“See,” says Clyde. “There’s your proof that Boog here didn’t do any of that stuff. I did. Tell him, Boog.”

I stare out the window at the empty countryside. Why is it that every time I leave Texas, I hope it’s going to be forever, but every time I come back I’m glad. How many days have we actually been gone? Then I see up ahead someone walking along the road, his back to the oncoming traffic, like he’s given up on hitchhiking and humanity in general. It’s that guy who ate my sandwiches. Once again he looks up at me as we pass him. “That’s right, officer,” I say gravely. “Everything Clyde says is exactly what happened.”

“Now that’s what I want to hear,” says Clyde, affably as a politician running for reelection.

I can tell the cop still has something important to unveil. He stares at me, his eyes bugging, like he’s more scared of me than of them.

“They’re saying something else about you, sir, to explain what happened there.”

The cop gulps nervously. “What they’re saying is,” he begins, “that you’re in league with...the devil.” Then he adds, “sir.”

“They’re saying that about us?” asks Bonnie, sounding horrified.

“No, ma’am, they’re only saying that about him,” he says, nodding in my direction.
Posted by Brendan McNally, author of "Friend of the Devil," and "Germania" at 3:27 PM