The Road to Del Rio VI: Stoned in Nacogdoches


After Arkansas, Herbert T. Barrow drives into Texas. He reaches Nacogdoches, a small city in east Texas, ditches his car, checks into a hotel, takes a bath and then hits the hay in a real bed for the first time since bolting out of Knoxville nearly a week earlier. When he wakes up the next day Herbert begins planning the next step of his journey.  Herbert's plan is to go to the train station, and buy tickets to Del Rio, down on the Mexican border. From what he's heard listening to the radio, he figures it will be easy to find work there as a singing cowboy on XER, the Mexican border blaster radio station. 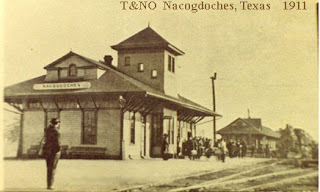 After everything that has happened to him over the last few days, Herbert figures it wouldn't do him any harm to "take a cure" from all the marijuana he's been smoking.  He reckons Nacogdoches is a good place to start, since it's not exactly famous for its "tea pads" and jazz clubs. But as it turned out, Nacogdoches did indeed have its own local viper scene. Walking past a Mexican bakery, Herbert smells something fragrant and friendly wafting from inside that definitely isn't bread being baked. A minute later he's getting high with the bakers who sell him a lid of primo marijuana.  And that's when everything starts going wrong.

Stoned, Herbert is suddenly too paranoid to go buy tickets at the train station. He ends up using some of the money he'd taken from Captain Hamer and uses it to buy a third-hand Marmon automobile, then finds a gin mill and gets very drunk before staggering back to his room and going to sleep.When he wakes up, there is a heavy rainstorm going on outside. In a flash of stoned brilliance he decides he should use it as a time to leave town in case Hamer is closing in on him. He packs his bag, goes downstairs, pays his bill, gets into his car and leaves. That's it for Nacogdoches, except that in the upcoming chapters, when Herbert falls unwillingly into the company of Bonnie & Clyde, cousin Clyde offers him some marijuana that, judging from the taste of it, he figures comes from the same Mexican Bakery down Nacogdoches way.  There is actually a true Bonnie and Clyde story about this I will relate in a future post.  But let's not leave the subject of Nacogdoches quite yet. 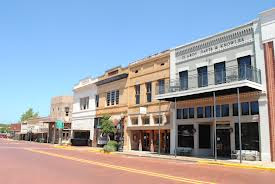 Nacogdoches bills itself as the first city of Texas, which is true in more than one way. For ten thousand years before the White Man showed up, the area was the center of a thriving Native American civilization known variously as the Caddos or the Alabama-Coushatta.  By the time the first Spanish explorers showed up, that civilization was long gone though the Caddos and Alabama-Coushatta were still around, mainly peacefully farming.

The Spanish saw it as a natural place to establish their side of the border with the French empire and built a stone fortress there back in the early 18th Century. By the late 18th Century, it had become clear that the French weren't really any kind of threat and the fort was dismantled.  There was a Spanish population.living there and when the fort got dismantled, the order came for the local population to return south.  But it turned out they didn't want to and elected to stay. Their leader was an officer named Gil Y'Barro and in a way, what he and his people did there resembles the settlement patterns of the Anglos who would settle there in a few more decades.

Nacogdoches became a pueblo, a settlement town far from the close control of the imperial authority.  The American settlers who came there not long after accepted the Spanish authority, but mainly it was lip service in exchange for land grants. There were numerous uprisings and short-lived Texas Republics established, including one called -- shades of the Marx Brothers -- the "Republic of Fredonia."

Eventually a longer lasting Texas Republic was founded, which later joined the United States and then the Confederacy. Nacogdoches was always a big town during the 19th century, fed largely by the cotton that was grown there. It was also a university town, home of what is today Steven F. Austin State University.

Early in the 20th century, Nacogdoches was big enough to support at least one theatre. Once Groucho Marx performed there when he was still just another unknown comedian and according to legend, Groucho informed the audience that "Nacogdoches is full of roaches!"

I'm sure Groucho wasn't just making it up.

The following is an excerpt from Friend of the Devil:


This rainstorm is a real East Texas gullywasher. I’ve been sitting here, stuck inside this car for two hours and it still doesn’t give any sign it’s going to ease up anytime soon. I think something is broken. I can get the engine to start, but the wheels won’t turn or anything. My stupid fault. Why did I have to drive off during a rainstorm? Why? The exact same reason I didn’t ditch the car and buy a train or bus ticket to Del Rio. In a word: marihuana.
Posted by Brendan McNally, author of "Friend of the Devil," and "Germania" at 5:33 PM