The Road to Del Rio IV - Eastern Oklahoma Hills, Edge of the Ozarks

After leaving Maw at Captain Hamer's roadblock, Herbert heads into eastern Oklahoma, a forested, hilly area right on the edge of the Ozarks. Here he finds a jazz station out of Tulsa and spends a couple of blissful hours listening to bands such as Fletcher Henderson and a "Hillbilly Boogie outfit out of Fort Worth, that can only be Bob Wills and his Texas Playboys. 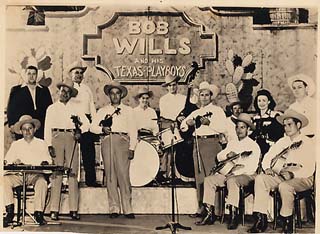 Bolb Wills' band played something called "Western Swing," a jazzed-up mixture of country two-steps, bluegrass, and blues, spiced with mexican and central European polka, along with whatever else happened to be hot at the moment. In the early 1950s, when the Rock-n-Roll craze was just starting, Bob Wills insisted they'd been "playing it for years!" They were probably right.

But in the 1930s, the music they played featured guitars, fiddles, a stand-up bass and a horn section that went between ragtime and Mexican music to reflect its Texas Western roots.

Listening to it while driving through the hickory forests of eastern Oklahoma must have felt heavenly. But then
Herbert picks up a hitchhiker, this time not a hairy country preacher, but a chestnut-eyed young man, who seems to carry the weight of the world on his sad shoulders. He is also very, very hungry.  Luckily, Herbert had just bought a bag full of chicken-salad sandwiches....

Excerpt from Friend of the Devil:


"It’s the middle of the afternoon a day later and I’m somewhere in eastern Oklahoma, driving through a hickory forest so dense, there’s not even a hope of any breeze ever finding its way in; cops, either, for that matter. From what I’ve been hearing on the radio, they got roadblocks on all the main roads. But not this old logging road, which, a friendly farmer told me, goes all the way to Coushatta Springs and ain’t hardly used by anyone anymore, except the occasional bootlegger. So right now, it seems like everything is going okay. I really wouldn’t mind it being the start of a trend."
Posted by Brendan McNally, author of "Friend of the Devil," and "Germania" at 3:26 PM