Folks in central Arkansas will tell you time stands still there all the time, but when Captain Frank Hamer and his mixed taskforce of G-Men and Texas Rangers tries bushwhacking Friend of the Devil narrator Herbert T. Barrow outside a filling station somewhere between Little Rock and Fort Smith, they find out the hard way that frozen time is more than just some idle talk coming from Razorbacks. For Herbert, though, it is just another indication that God and the Devil are cooking up some new way to get at him.

A day or so after giving a ride to a man who clearly has to be the Devil, Herbert picks up another hitchhiker, a chestnut-eyed young man, who, were Herbert not such a fervent atheist, he might recognize as "The Other Guy;" or, God himself. Of course, all these extremely loud hints are completely wasted on Herbert T. Barrow, whose lack of faith is boundless. 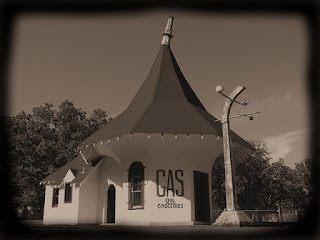 After extending highway hospitality to the Young Man, only to have him gobble up his entire newly-bought bag full of chicken salad sandwiches while matter-of-factly recommending Herbert turn in Clyde Barrow, his cousin, to the 'Laws,' Herbert T. Barrow kicks the Young Man out of his car. He starts driving up random
country roads, hoping to shake Hamer or anyone else who might be on his trail. Eventually Herbert stops at a filling station for more gas and something to replace the sandwiches he never got to eat.  But as he walks across the lot, heading for the store, Hamer and a bunch of heavily armed Feds pop up from behind some parked cars and open up on him.

But before any of the bullets they're shooting can tear into him, something very strange happens. Everything freezes; time stands still right there in front of the filling station. Herbert sees the bullets frozen in the air, birds stuck in mid-flight, Hamer and the other lawmen's faces frozen in their murderous grimmaces. But then Herbert notices something else. He can hear a radio playing from inside the store. There's a hillbilly gospel group singing an old-timey song of salvation. It can only be XER, Doctor Brinkley's Mexican border blaster. It appears that outside this little part of central Arkansas, time continues to pass normally.

The following is an excerpt from Friend of the Devil:

I yank the BAR from his hands, then point it back at him, curling my finger around the trigger, and telling myself I’d be completely within my rights if I killed Hamer right now.

But I don’t kill him. Because I already killed my last man. That’s what I told myself back in France, that I’d done killed all the people I was ever gonna kill and that even a murderous bastard like Hamer ain’t changing it.

Still, I’d like to take the rifle butt and smash in his face a little, but I don’t. That’s not how we do it in West Dallas. Instead, I try taking my anger out on the bullets, batting them with the rifle butt, but to my surprise, hard as I swat them, they hardly budge at all. So instead I rip the clip out, empty the magazine and then, holding it by the barrel, I smash it hard against the ground, shattering the stock, the receiver and the bolt. Then I toss it aside, and go over to the two guys who are leaping aside and pluck their rifles from the air, but instead of smashing them against the ground, I just spend the next few minutes going completely crazy, attacking their cars; smashing the windshields, the headlights, radiators, carburetors, slashing the tires.

Finally, I’ve had enough. I toss the broken rifles aside and just stand there trying to catch my breath. That’s when I hear the music playing. It’s coming from a radio inside the store; one of those hillbilly family quartets they have singing on the border blaster:

It makes me happy that while time might be standing still here, somewhere down in sunny Mexico reality goes on just like it always does. It also makes me suspect that this is all very local and temporary and might end any moment so I’d better get a move on, so I go to the gas pump and fill up. Then I run into the store and fill a bag with apples, soda crackers, a loaf of sliced bread and a big piece of ham, then carry them back to my car and load them into the back seat.

I’m about to start up the engine and go, when I look at Hamer and decide I still need to finish the job. So I go back, reach into his jacket and remove his billfold, which is bulging with ones and fives. I can use those. Then I notice he’s got a shoulder holster and a big pistol riding inside it. I reach in and take it out. It’s a beauty, all right; a .45 caliber, single action Colt, silver plated. On the side of it I see inscribed, “Capt. Frank Hamer, State Ranger. Presented by the citizens of Corpus Christi.”

I decide Imo keep it for myself. But because it wouldn’t do without I let him in on who done this particular deed, I extract the pencil and notepad he’s got in his pocket and I write him a little note.

“Dear Capt. Hamer, I could have killed you now, but, unlike you, that’s not how I operate. I haven’t done anything wrong, I’m not part of Clyde Barrow’s outfit and don’t intend to join. But if you keep bothering with me, by God, I shall kill you with your own pistol.”

And I sign it, “Very truly yrs, Herbert T. Barrow.”

I stick this back inside his holster, then head back to my car and drive away.
Posted by Brendan McNally, author of "Friend of the Devil," and "Germania" at 5:57 PM