Franzi had been asleep on a bunk in the basement cellblock which had been converted to a dormitory for the junior officers when one of the Reichsfuhrer’s adjutants came down and ordered him to get dressed. “He wants to see you now,” he said.

Franzi sat up. “Any idea what’s up?” he asked. The adjutant shook his head. Franzi got dressed and followed him upstairs. When they reached the fifth floor landing, the usual crowd was gathered around the wireless. “Any news?” he asked.

One of the colonels looked up. “The fighting has stopped in Italy. Some kind of truce,” he said.

“I guess it won’t be long now,” Franzi said. The others all nodded back. 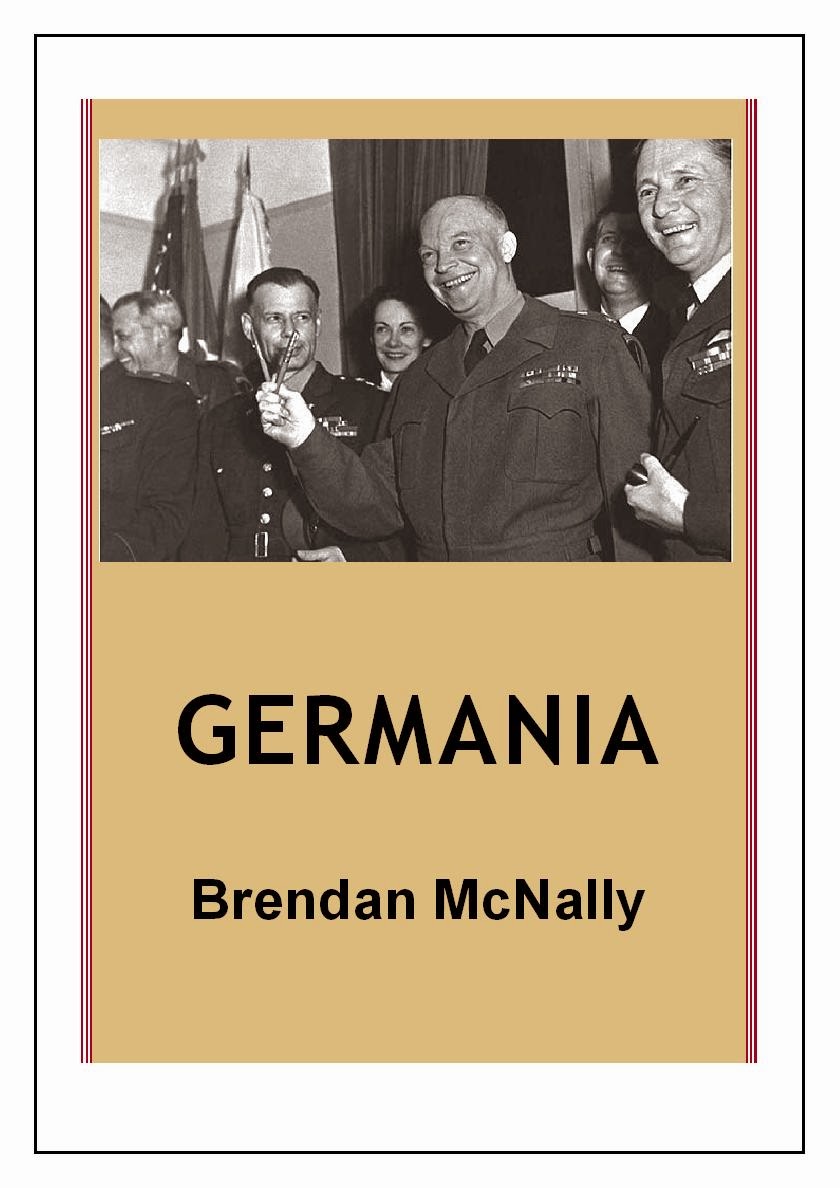 Himmler looked calm when Franzi entered his office. “Have a seat, Loerber,” he said, pointing to one of the stuffed chairs. “I’ll be with you in a second.” He gestured to the adjutant to leave.

As Franzi sat down, Himmler quickly put his signature on a batch of papers and then put them all into his ‘out’ tray. He got up from his desk and walked over and took the chair opposite Franzi.

“As you probably know, Loerber, I’m putting together a government. We should become operational in another day or two, once things are over in Berlin. The question right now is, of course, who can I count on? Who is with me and who might be backing another faction?”

“Another faction, Reichsfuhrer?” asked Franzi. “Is there another?”

“Yes, Goering,” said Himmler. “My sources in the south tell me he is still hoping to exercise his old official designation as successor to take over. He has apparently been telling people that he is uniquely suited to reach a peace agreement with Eisenhower.”

“Is there any indication that he has actually contacted Eisenhower?” asked Franzi.

“No, there isn’t. But to be honest, that isn’t my major area of concern right now. What I want to ask you about is Grand Admiral Doenitz.”

“Grand Admiral Doenitz?” Franzi was confused. Doenitz might have been the head of the Navy, but as far as political power was concerned, he was nobody.

Himmler noted Franzi’s bewilderment and smiled. “He was just here a few minutes ago. You didn’t see him?”

“I’m sorry, Reichsfuhrer, but I was asleep. I was up till four.”

“Oh, too bad,” said Himmler. “I wanted to know how you read him. There is something about the man’s karma that I can’t completely grasp. Do you know anything about him? Isn’t your brother Zigmund one of his favorite U-Boat captains? Has he said anything about him?”

At the mention of Ziggy, Franzi felt cold sweat. Ziggy was the only other person who knew he and Manni were enemy agents. “I’m sorry, Reichsfuhrer,” he said. “But my brother and I haven’t spoken in years.”

Himmler fixed him with his blankest stare, like he couldn’t get Franzi’s measure. “I’m very sorry to hear that, Loerber,” he said. “But you might be interested in knowing your brother has just been appointed to a very sensitive post on the Grand Admiral’s staff." Himmler paused. “A strange choice, I thought, in view of some of his past activities.”

“Well you do know that on more than one occasion he has made statements critical of the Fuhrer?”

That’s nothing, thought Franzi. On more than one occasion he attended services at a Berlin synagogue. He’s critical of the Fuhrer and all Nazis in general, but he’s a loyal U-Boat officer and when we asked him to help us spy against the government, he refused.

Franzi adopted a sorrowful look. “Yes, Reichsfuhrer, that’s why we had a falling out. I couldn’t tolerate hearing any more of it. I know I should have reported him, but he’s my brother. Forgive me, Reichsfuhrer.”

Himmler gave an indulgent smile. “That’s all right, Loerber. His loyalty doesn’t interest me. My reason for bringing it up is simply that I’m trying to understand Doenitz. I asked him if he would support me. Everybody else is falling all over themselves to join my government. But you know what he told me? He said, ‘Reichsfuhrer, I will support unconditionally any legitimate successor.’ Now what’s that supposed to mean?”

What it meant seemed obvious enough to Franzi, but instead he answered politely, “I don’t know, Reichsfuhrer.”

“Doesn’t he see what’s going on? The Fuhrer is determined to drag the whole world down with him. He doesn’t want a successor.”

“Did you tell Doenitz that?”

“How could I? And you know what else he said?”

“I was trying to give him a hint of our negotiations with Eisenhower. You’d think he’d be grateful that someone is actually doing something. But instead he was absolutely hostile. I can only interpret that as a proof that he is backing Goering as a potential negotiator with Eisenhower. What do you think?”

Franzi thought of Goering; the fat, drug-addicted failure in his splendiferous uniforms and laughed. “Honestly Reichsfuhrer? At this point I cannot imagine anyone taking Goering seriously.”

“But what other possibility is there, if not Goering? He couldn’t be backing Speer. Speer doesn’t have any power. For God’s sake, all he is, is the Fuhrer’s draftsman!” Then suddenly Himmler lit up. “I have an idea. What if I show you a photograph of Doenitz and you probe it for me, tell me what vibrations you’re getting from it. I bet that’ll work!”

“Probe?” asked Franzi with a sinking feeling. Probe? Where did Himmler get these ideas from?

Himmler got up, went over to the credenza, and pulled out a framed photograph portfolio from one of the drawers. He handed it to Franzi. “Go ahead, probe it. Tell me what you get.”

Franzi took the photograph in his hands and stared at it. An intense-looking, dried up little man in a Navy uniform. These guys all look exactly the same, he thought. He could be a ferry boat captain.

Himmler leaned forward. “Well? What do you see?”

Franzi tried to think of something meaningful to say. The man in the picture didn’t look especially warlike or crafty or even that he liked the sound of his own voice. He looked like one of those guys who believed, first and foremost, in following orders, perhaps he was also more than a little sardonic.

“You’ve got him all wrong, Reichsfuhrer,” said Franzi. “This man doesn’t know or care about politics. He’s a soldier, he follows orders, he believes in complete obedience to whoever is in charge. I don’t see him plotting against you with Goering or anyone else.”

“But what about the war? What is his position on how to end it?”

“His mind is on his submarines, Reichsfuhrer. He thinks about that and nothing else. The rest of the war is someone else’s business.”

“Actually I think you’re on to something,” reflected Himmler. “There are those new miracle U-Boats of his. They’re supposed to be ready to launch.”

Suddenly Franzi saw himself inside a submarine, but different from the ones he’d seen in magazines. It wasn’t so cramped. The equipment was modern, automated. He could feel the speed of it cutting through the water. And suddenly he saw his brother standing at its helm, looking through a periscope, calling out orders to his men. And then, just as suddenly, the submarine was gone and his brother was standing in the wreckage of a city, rifle in hand, helmet on his head, humming to himself: Who’s afraid of the Big Bad Wolf, Big Bad Wolf, Big Bad Wolf?

Franzi opened his eyes and looked down at the face his fingers were touching. He looked up at Himmler. Himmler looked pleased. “You’re a very bright young man, Loerber. Maybe you should go back to sleep now.”

Franzi stepped outside the office into the corridor. The adjutant was waiting in a chair. He got up. “I trust that whatever the Reichsfuhrer has discussed with you will remain private, Loerber.”

“Naturally,” answered Franzi and went to look for something to eat.
(Excerpt from Germania, Simon & Schuster 2008, now also available on Kindle here).
Posted by Brendan McNally, author of "Friend of the Devil," and "Germania" at 8:38 AM