This is the second stop of our trip through the Southlands with fugitive bluesman Herbert T. Barrow.

Three days and nearly a thousand miles out of Knoxville, Herbert T. Barrow is driving north through Mississippi and still no sign of any cops on his trail. Are they real or just part of his hopped-up, reefered-out imagination? 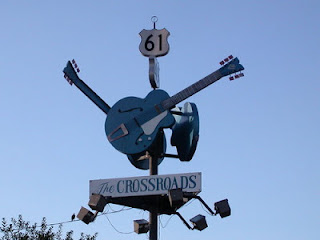 Herbert's plan is to head west through northern Louisiana and keep going till he gets back home to Eagle Ford in West Dallas and then keep his head down until everything cools down enough that it's safe to start playing the joints in Deep Ellum. But it doesn't quite work out that way. A couple miles before he's supposed to make his turn, he makes the mistake of picking up a country preacher who's hitch-hiking and obviously having a difficult time of it. Suddenly, for no great reason at all, Herbert agrees to give the preacher a ride to, of all places, a crossroads just outside of Tupelo, where, he says, he was supposed to meet someone the previous midnight.

Being a bluesman, Herbert has heard the legend of the Devil at the Crossroads countless times from his
black colleagues. It was something he considered kind of pathetic. The black bluesmen needed to make up stories about themselves to increase their 'badness.' Herbert is a staunch atheist and he detests talk about the Devil almost as much as he hates talk about God. He wonders if the legend could have gotten so far that the crossroads could now be attracting white country preachers eager to strike a deal with the Devil.

Following is an excerpt from Friend of the Devil, right at the moment Herbert and Stevens arrive at the Crossroads:


Hillbilly boy standing in my headlights, tall, skinny, with eyes as big and wild-looking as a jackrabbit’s, and seeing him, I’m thinking, man, if he’s the Devil, then I’m Franklin Delano Roosevelt.

He stands, feet slightly apart, hands half-clenched into fists, like he’s expecting a fight. But seeing how his shoulders droop, it’s obvious he already knows the outcome, because if anyone was ever born already defeated, it’s got to be him. Bet he isn’t twenty five, but life has already worn him down to a nub. Wife, kids, the work that he either can’t find, or, when he does, never pays enough to separate him from worry. And being what he is, he got used to cutting corners here and there and probably got caught at it more than once, because he’s got that same broken look as half the boys did back at Eastham Farm.

And this is the guy’s got something for Stevens that’s more valuable than gold? Shit, he don’t look like someone you’d bother crossing the street to collect money from. He’s just some poor, dumb hillbilly with nothing in his hands but his fists. Then I notice there’s something lying at his feet, something half-wrapped in a scrap of burlap, something small and inconsequential. But then why is it there and why has he elected to stand his ground directly behind it?
Posted by Brendan McNally, author of "Friend of the Devil," and "Germania" at 10:18 AM