Road to Del Rio 3: A Little Filling Station in Missouri


It is inside a little gas station and grocery store in rural Missouri that Herbert T. Barrow learns that, of all things, he is being touted by the media as the newest member of the Barrow Gang. Not only that, but they've also got him down as a "mad-dog killer" and the gang's criminal mastermind. He has no idea what to make of it, since the last time he'd seen his young cousin, Clyde was only about ten years old. 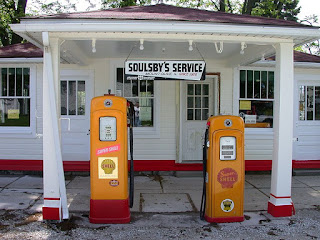 Herbert admits to the reader that back then he had run around with Clyde's older brother Buck, breaking into warehouses and stores late at night, which, technically, makes him a charter member of the outfit. Of course that was twelve years earlier, long before the Barrow Gang was celebrated as America's favorite
Public Enemies. Herbert wonders if any of this could have anything to do with Mr. Stevens, the hairy-faced country preacher he'd given a ride to earlier, who seemed to know everything about him. Stevens, is of course, the Devil himself, but no matter how much evidence points to that fact, Herbert would never connect the dots, since admitting to the Devil's existence, also means, by extension, admitting to the existence of God, which Herbert, being a fervent athiest, refuses to do.

On the other hand, this little corner of southern Missouri is, to anyone from the flatlands of Texas, a kind of heaven on Earth.

Here is a little quote from "Friend of the Devil:"


Suddenly I realize how ravenously hungry I am and that if I could, I’d take them right now and gobble them down on the spot. But I don’t, because I’m on the lam and best not to do anything quirky that’ll stick in their memories. No, I’m just a quiet, well-mannered city feller who came and went without giving them no never-mind. Instead I start a conversation.

“Man says you got the Barrow Gang coming through?”

“That’s what they saying on the radio.”

“Only that they’s in the vicinity, going to effect a rendezvous with Clyde Barrow’s cousin.”

“Cousin? Didn’t know he had a cousin.”

“Yes, sir. They say his name’s Herbert T. Barrow and that he’s a bad one.”

“Mad-dog killer he is, G-men been chasing him all the way from Knoxville."
Posted by Brendan McNally, author of "Friend of the Devil," and "Germania" at 9:48 AM