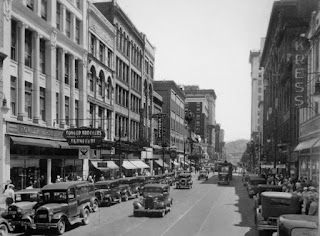 When Friend of the Devil opens, the narrator, Herbert T. Barrow, is already three days out of Knoxville, Tennessee. He'd been playing in a "society orchestra" in one of the town's posh resort hotels. Life had been pretty lush for Herbert. The pay was steady, he was living rent-free with the other orchestra members in the bunkhouses behind the hotel. But then one day he spots two men he thinks he recognizes from the prison he'd snuck out from. Suddenly Herbert was out the door, and behind the wheel of a stolen Ford with a radio that doesn't work, heading for the nearest state border. Adios Knoxville.

At the time,1933, Knoxville was the biggest city in eastern Tennessee. Unlike most of the south, Knoxville was highly industrial, and a manufacturing center since before the Civil War. With its large German and other immigrant population, Knoxville had never been a supporter of slavery or the Confederacy. Things boomed after the Civil War, but by the end of the 1920s, manufacturing was dead and Knoxville was on its way to becoming what John Gunther was to say was the "Ugliest City in America."

Which isn't to say that Knoxville didn't have its nice side, which was where Herbert T. Barrow had been hiding out. Even with the Depression, Knoxville's posh nightspots and resort hotels never stopped drawing well-heeled vacation-goers. The Ray Covington Orchestra, which Herbert played trombone in, was just one of several "society" orchestras playing the ballrooms and nightclubs.


Below is an excerpt from  Friend of the Devil. Stay tuned, Friends and Neighbors! Our next stop will be Highway 61, Mississippi, heading north.

I take another big hit, like all the talk he’s putting down is just so much street patter, but the whole time I’m wondering to myself, how the heck does this evil cat know I was ever in Knoxville?

Stevens laughs. ”Oh, I know all kinds of things about you, my friend. Your name is Lowell George, isn’t it? You were second trombone for that lush dance orchestra that plays at the Starlight ballroom at the Van Buren Hotel. What’s its name?”

Stevens takes a big long hit. For the longest time he holds it in his lungs while keeping the burning reefer in his right hand as he flexes his wrist, like there’s a point he’s about to make as soon as he lets the smoke out of his lungs. I stare out the window at the marshmallow fog and wonder how I’m ever going to get out of this one.

“The Ray Covington Melody Makers,” I say like it was a long time ago.
Posted by Brendan McNally, author of "Friend of the Devil," and "Germania" at 2:24 PM