Himmler's Astrologer Having Doubts About the Upcoming Himmler-Eisenhower Alliance

Mostly they sat in chairs set up along the corridor facing the line of windows that looked down into the courtyard; the higher ranks at the far end, Franzi and the other junior officers down closer to the doors leading to the stairway. The Reichsfuhrer had taken the large corner office with the double doors while the three smaller offices were used by what was left of the command and operations staffs. Near the entrance, across from the lavatories, a hotplate was set up where they’d boil water for coffee and tea. If they wanted to smoke they could step outside to the top floor landing, but beyond that, they couldn’t leave. They didn’t want them talking to anybody on the lower floors or out in the yard. 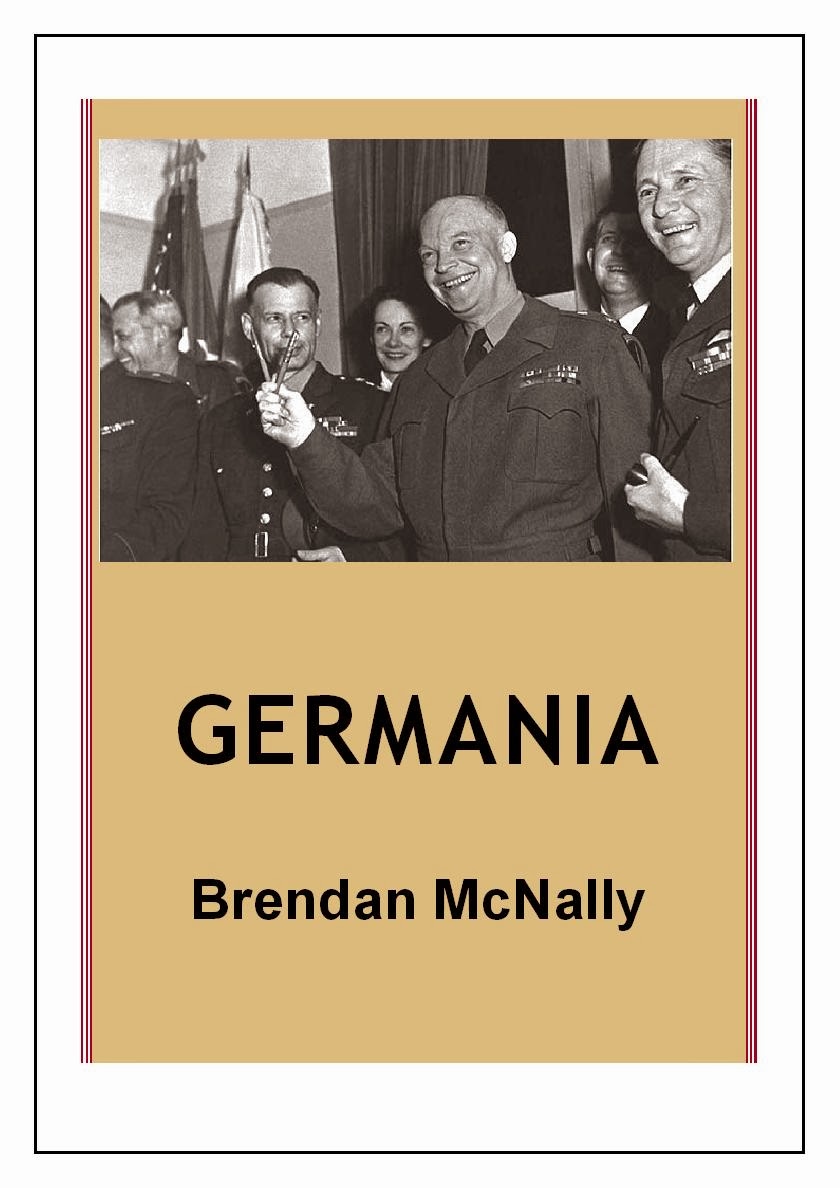 This, they were told, was to be their new headquarters. After a week of moving from place to place, the SS had taken over the large gray building of the regional police presidium in the north German city of Luebeck. The small courtyard was crammed with half-tracks and open-roofed Volkswagens while dozens of heavily armed Waffen SS troopers milled around. For the most part, discipline was being maintained, but even so, cracks were starting to appear. For the first time everyone had stopped pretending about victory being inevitable. The war was lost and they all knew it. Their one shred of hope lay in the Reichsfuhrer’s completing his deal with Eisenhower, and from what Franzi could tell, things were progressing nicely.

Each day a fresh stream of supplicants came in to confer with Himmler and assure him of their support. There were party officials, gauleiters, generals, ministers, deputy ministers, all eager to ingratiate themselves.

Out on the landing, there was endless, unhindered speculation. They’d moved a wireless there to listen to the news reports coming out of Berlin, which weren’t actually good for much since about all they ever said was how the Fuhrer was continuing to lead the defenses of the city and that fresh relief spearheads were expected to arrive at any time. Franzi told himself that sooner or later, the Fuhrer continues to personally lead the defense of Fortress Berlin, was going to get replaced by something more ambiguous, yet more telling. The Fuhrer has gone out to join the fighting. The Fuhrer has left the Bunker. But then Radio Berlin stopped broadcasting, so they tried the Hamburg station, which turned out didn’t have any news, though the music was nice. Hearing two colonels complaining, Franzi took the bold step of suggesting they try Radio Atlantik.

At first, the two stared at each other, wide-eyed, wondering if they should. Radio Atlantik was an enemy propaganda station and listening to it was verboten. Finally one of them said, “Can you find it?” Franzi started twisting the dial and ten seconds later, he had it tuned in.

"Turn it up!” urged one of the colonels. Immediately they heard a young man’s friendly voice reading reports of air strikes and armored thrusts and about British and American bombers now being used to drop food into parts of Holland where the civilian population was on the verge of starvation. Apparently without a ceasefire being declared, the German military authority there had agreed not to hinder the relief effort. Now that was real news.

Berlin was now almost completely overrun with Russian troops in the center of the city, they said, with only a few scattered pockets remaining in German hands. Meanwhile in San Francisco, a large conference was being held for something called the United Nations.

They continued listening to it for a while when a voice behind them said sharply, “What are you doing?” They looked up and saw an SD major staring hard at them. Neither of the colonels acted like they cared what some pipsqueak major thought about anything. “What do you think?” one said, cigarette dangling from his mouth.

"Oh stuff it,” said the colonel.

"You’re listening to Radio Atlantik, the voice of Free Germany,” announced a young woman with a pronounced Schwabian twang. There were three notes played on a chime, their call sign, and then the young woman said, "And now for some happy music, here’s Cab Calloway’s Jumpin’ Jive!”

The major nearly exploded. “How dare you? And right here outside the Reichsfuhrer’s offices?” His face shook with anger and disgust. “You’re all under arrest,” he said. “So help me, I’ll have you all hanged.” Then he turned to a captain having a cigarette alone in a corner. “Don’t let any of them leave,” he barked and turned to go downstairs.

In a searing instant of alertness, Franzi pitched himself into the major’s mind just enough so that when he started down the stairs, he misjudged the second step by an inch, while the third turned to butter beneath his feet. He went flying downward, head over heels, hitting the middle landing with a loud thud and a crack. He was dead, his neck broken.

The three stared down at him dumbfounded. Franzi reached over and turned the radio off. Word of the accident ran through the corridor, but nobody bothered getting up to see. A few minutes later the body was taken away and the radio was back on. Franzi staggered back inside the office corridor and slumped into the first empty chair he could find. For a long time he stared at the wall calendar, before the words and numbers began to make any sense to him. Today was April 30, Walpurgisnacht, the last night for resident witches to get out of town. Franzi wished there was some way he could use the occasion to justify doing the same.

He was no longer needed there. It had been more than a week since he had given Himmler a massage. His panic attacks had ended once Bernadotte went to Eisenhower. Having thus broken with the past, Himmler was a changed man. Himmler the icy interpreter of orders had become Himmler the personable, Himmler the decisive and calm, Himmler the man of destiny. When Franzi got called in now it was simply as an advisor.

Not that Himmler had stopped dithering entirely, but it was now focused on less pressing matters. He couldn’t decide what form his new government should take. One day he’d want a two-chamber parliamentary system, the next he’d talk about reviving the old Nordic ‘Volksthing.’ Then he’d dither over who to include in his cabinet. But one thing he never wavered on: whatever its form, there would not be a place in it for Albert Speer. Once he announced to Franzi and the others; “Gentlemen, I do not anticipate having any need in my administration for a Reichsminister for Mechanical Drawing. Nor do I expect to rebuild Berlin as some Twentieth Century version of Rome.”

There was also no dithering when Himmler talked about running Eisenhower’s security apparatus; how their common vision of a new Europe would combine the universality of Charlemagne and the mystical grandeur of the early German monarch Henry the Fowler; how the Soviets would quickly collapse under their combined power; how great the future of Europe was going to be now that Hitler was out of the way.

It was all very encouraging, except for one nagging little detail. Hitler wasn’t dead yet. He was still in his bunker sending out radio messages hourly and ordering non-existent armies about. Another nagging detail was that even though the peace discussions seemed to be at an advanced state, Eisenhower still had yet to call off his armies. The speculation out on the landing was that he had to wait until the Russians finished off Hitler before moving ahead with the ceasefire. That made sense, everyone agreed. If Schellenberg’s boundless optimism was any indicator, then the Himmler-Eisenhower alliance was a done deal.
(Excerpt from Germania, Simon & Schuster, 2008, now also available on Kindle here).
Posted by Brendan McNally, author of "Friend of the Devil," and "Germania" at 12:09 AM