Speer Tells the Americans Everything About Ball Bearings, but Won't Talk About Jews

By now, Albert Speer's fortnight-long discussions with the bankers-, economists-, and Wall Street lawyers-in-uniform who made up the United States Strategic Bombing Survey (USSBS) have become the stuff of legend to a certain kind of World War II history buff. It has even found mention in a song by The Who. It is certainly one of the things that stoked my interest in the Flensburg period.  Below is excerpt that got cut from the final version of my novel, Germania.  I think the editor thought it was too technical to hold the attention of  hipsters and people who live in Olympia, Washington. But I wrote about it the way I did, because I still believe that if you can't grasp the importance of things like ball bearings and abrasives and oil baths, then you'll never understand how the fate of humanity sometimes hinges on seemingly inconsequential things.


Speer decided to change the subject. “One thing I should mention, regarding ball bearings, is that, yes, there were times when for one reason or another we experienced some short-term shortages. During those times, yes, we were forced to turn to outside, foreign sources for ball bearings.”

Paul Nitze frowned. “Other sources? You mean Sweden?” he asked.

Speer gave a nod. “Yes,” he said, “from Sweden. But also from other sources.” He raised his eyebrows and gave a world-weary shrug. “I’m sure you know what I mean.” 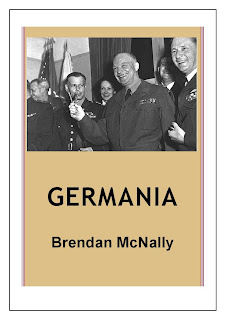 Still frowning, Paul Nitze shook his head. “No. What do you mean?”

“From all those trading companies in South America and Spain that got them from American subsidiaries,” answered Speer.

“You’re saying you got American ball-bearings?”

“Of course. We also bought Canadian ball bearings and ones from Britain as well. There was a brisk trade in them through Ireland.”

After that they broke for lunch.

When they resumed, the discussion turned from the effects of aerial bombing, to a topic which seemed to fascinate everybody both in and outside of Germany: the wonder weapons.

“I’ll be honest with you,” began Speer. “They may have had great propaganda value, but personally, I never believed in them. My experience in other fields taught me that whenever you pioneer radical new technologies, you are going to have too many unexpected problems and at that time, our margin for error was not one that would allow for it. Of course we did it anyway. But very few ever reached completion. And when they did get produced we had neither the fuel for them nor the trained personnel capable of operating them.”

“The V-2 rocket is an interesting case in point. By all indications it was an incredible weapon. It went several times faster than the speed of sound, traveling into to the very realm of outer space. And its effect on the British public was possibly even too great to quantify. But when you look at the costs and the resources involved in bringing it to production, you have a different story.”

“We estimated that building a V-2 rocket cost approximately as much as it cost you Americans to build a B-17 bomber. On the face of it, it is a meaningless comparison, of course, since it was something you could afford and we could not. But be that as it may, it does nevertheless allow us to make a number of important observations.”

“Both cost the same to build and the V-2 missile’s one-ton warhead is roughly equal to a B-17’s bomb load. However the V-2 can only be used once, while the B-17 will keep flying until it is shot down. We estimated that on average a B-17 will complete seventeen missions before this happens.”

“Nineteen and a half,” corrected George Ball.

“Be that as it may, the V-2 will only fly once. Though I am sure the B-17’s vaunted Norden bombsite was never quite able to land a bomb inside a pickle barrel as had often been claimed, under the right conditions, if used properly, it successfully put bombs onto a factory or some other designated target. The V-2’s accuracy was so poor it could not be directed against any specific strategic target. At best it could be sent to hit a city or some other broadly defined area, and even then it stood a fifty percent chance of falling outside a thirty-mile circular area probability. Ultimately it was nothing more than a terror weapon.”

“But it was quite a terror weapon,” interjected Paul Nitze. “If anything came close to breaking the English will, it was that.”

“I’ll give you another example,” said Speer. “We had something called the ‘Volksjaeger,’ or ‘People’s Fighter.’ It was a rather ingenious little jet-powered aircraft that was built almost wholly from plywood and other non-strategic materials. One day someone came up with the design, literally on a paper napkin. We talked about it, drew it up, started a program, and one hundred days later we had one built and actually flying. After that we started building them in underground factories in the Harz Mountains. We even had a program set up to train Hitler Youth to fly them. I think the first unit became operational about three weeks ago. If they ever managed to do anything with them, I haven’t heard, but I doubt it was much.”

“It was an incredible achievement, but ultimately it was a complete waste of resources which we could not afford to squander. We would have been better off using our talents on something more prosaic, but useful. But of course, the Fuhrer liked that sort of outlandish thing. It captured his imagination and it allowed him to talk about the kind of visionary weapons that would restore our qualitative advantage and bring us to victory.” He gave a disgusted grimace. “A complete waste.”

“I guess that was lucky for us,” the young Air Force officer said joylessly.

Everyone nodded, including Speer. At that moment he suddenly remembered the other young officer who’d come with them that first time, the one who looked exactly like Manni Loerber. He’d never returned. But then, neither did Manni. He wondered if they’d found each other.
(Germania was first published by Simon & Schuster in 2008, and is now also available on Kindle here)
Posted by Brendan McNally, author of "Friend of the Devil," and "Germania" at 2:19 PM