Admiral von Friedeburg Give His Final Salute, Takes His Leave

They drove down to the waterfront. There, on the quay beside the Patria, groups of people had gathered, talking nervously among themselves, like they knew they were about to witness something historical. There they found Galbraith and several of the others standing together in boisterous mood. When Manni approached them, they all seemed taken aback to see him there.

“Minister Speer thought you would like to have these reports,” said Manni, feeling a little ridiculous. But then he realized Galbraith was also embarrassed. Manni, like Speer, was from yesterday, an inconvenient reminder of something that wasn’t supposed to spill over into the present. Manni sensed his unease and imagined he probably felt like a swain that had been tracked down by the chambermaid of a lady whom he’d assiduously courted for what turned out to be only a brief dalliance.

Choosing to accept with aplomb the unpleasant role which had been accorded him, Manni gravely held out the reports to Galbraith like it was his bastard child. The effect must have worked, for Galbraith visibly froze with trepidation and reticence. Then, casting his eyes down in mock shame, Manni offered the unloved documents to Nitze. Please sir, his eyes seemed to be saying, give them a good home! 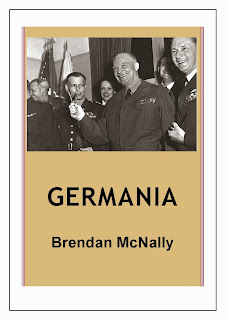 Nitze took the papers and began browsing through the titles. “Hey, this is some good stuff,” he declared. “An appreciation of the effect of bombing on the manufacture of specialty steels, Experience of the Vegesak shipyard in streamlining manufacturing processes for the Type XXI U-boats. Hey, look, here’s one on plans to destroy the Soviet Electrical Grid."

"You take care of it then,” Galbraith sniffed without interest.

“Gosh, a month ago this stuff would have been worth several times its weight in gold,” observed Nitze. “Now it’s just historical ephemera. Jesus, how the worm turns. Thanks. Say, where’s your brother Sebastian? We’ve been looking for him.”

Nitze laughed. “That guy can put a tomcat to shame!”

Manni laughed too, but it had a hollow sound. He looked at all the bustle. “What is going on here,” he asked.

“It’s the Kibosh, my friend,” said Ball. “The last of the Third Reich is finally being dissolved.”

“Oh,” said Manni, like he wasn’t entirely sure what it entailed. “I guess it took this long for the paperwork to catch up.”

George Ball laughed, Galbraith gave him an icy glance like he should feel free to leave. Nitze continued going through the reports, smacking his lips with delight as he did.

“We’ll tell your brother you were looking for him,” said Spivak pointedly.

“Seen anything of Franzi?”


“Here comes somebody,” shouted someone in the crowd, “an admiral. Is it Doenitz?”

“I can’t tell,” answered someone else. “Ask him,” he said, pointing to Ziggy.

“Scuze me,” the man said. “Is that Admiral Doenitz up there?”

Reaching the bottom he stopped and turned to Ziggy. He spoke to him like each word was an effort. “Well Captain Loerber, I suppose this is the end. I want to thank you for your service and your comradeship. When you see the Grand Admiral, will you give him a message for me. Tell him this, ‘Admiral von Friedeburg, having fulfilled his duty to the last full measure, is taking his leave.’ Do you have it?”

Ziggy stared hard into von Friedeburg’s glassy eyes. “I will give him the message,” he said. “Goodbye Admiral.”

They saluted. Von Friedeburg turned and went with his guard over to a waiting truck. As the driver and the guard brought down the truck’s back gate, they looked up to see a large group of U-boat men being led down the quayside under British guard.

They were marching and as they approached von Friedeburg, they snapped into a salute and began singing defiantly. It was We are Sailing Against England, a song from the old days, when the future still looked bright, and their enemies’ days numbered.

“The nerve!” fumed Fassberg. “I think somebody needs to remind these birds they’ve lost.”

“Fucken’ Krauts!” yelled someone else.

Ziggy watched von Friedeburg. His eyes were on the ground and he seemed too wrapped up in his own thoughts to notice them marching by. Ziggy snapped to attention and returned the passing men’s salute. “Admiral!” he shouted.

“Admiral!” Ziggy shouted again, louder than before. Von Friedeburg looked up and came to attention and brought his right hand up sharply to his brow. The British guard grabbed him by the shoulder and pulled him up onto the truck.

The marching sailors had passed, but they continued to sing the final refrain.

"What happened to Franzi? Where is he?” Manni asked Ziggy.

“I don’t see anything,” answered Ziggy. “Give me a minute."

“Here comes another one,” someone in the crowd shouted.

“Head of the OKW operations staff.”

“Imagine him leading anyone in battle?”

“I can’t imagine any of them leading anyone in battle.”

“Jesus, I’m starting to feel like a bobbysoxer waiting to see Sinatra.”

“Yeah? Well so does Montgomery.”

“Well, Doenitz looks like a bigger pinhead than all of them.”

“That’s for sure!” Both the British and American elements of the crowd could agree on that.

“Honestly, who’d have thought that after spending all these years fighting the Nazis, they’d turn out to be just a bunch of jerks!”

Ziggy watched Doenitz being led off. God knows what fate awaited him. Maybe they’d hang him, maybe he’d just spend the next ten years in jail. Either way, Ziggy found it hard to care. This was a good day for Germany, he grimly told himself. The regime which had led them into the depths of barbarity was being expunged from the face of the earth.

He thought about his life as a U-boatman, his years at sea and the war which he shouldn’t have survived. He saw the image of himself standing on the deck of a ship staring out into the endless expanse of cold gray sea and suddenly it all felt like somebody else’s life.

But something about it didn’t feel right. He closed his eyes and let the image wash over him the way a memory could not. And he realized that image was not himself at all. It was Franzi, standing on the deck of a trawler which was only then clearing the Kattegat and making its way into the open waters of the North Sea. He couldn’t tell if he was happy. But he knew he wasn’t worried. At least not the way he’d been for the last ten years. He was with friends, friends, just like Sebastian had talked about.

(This is a chapter left out of the final cut of my novel Germania, first published by Simon & Schuster in 2008, now also available on Kindle here).
Posted by Brendan McNally, author of "Friend of the Devil," and "Germania" at 2:24 PM