Shortly after Hitler's death, Walter Schellenberg travelled back to Stockholm to meet with Western intelligence, who turned out to be something more than he'd bargained for. Students of Cold War history should know immediately where this is going.

(Following is a deleted scene from Germania.) 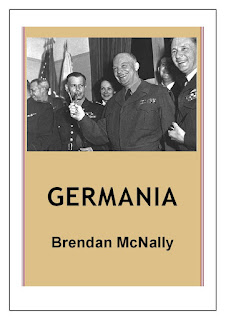 “Really quite an interesting idea you’ve got. A mole, you say?” the Englishman said, acting properly impressed by what Schellenberg was propounding. “Quite interesting, yes.”

"Cambridge, you say?” he went on. “Really! How utterly devilish! Well, you must hand it to Ivan for his sheer audacity. Cambridge? I mean that’s something no one ever would have even dared imagine. If this is true, then I’d say we really are in quite a predicament.”

“Oh, I assure you, it’s all true,” chimed in Schellenberg. “Our sources in Moscow are at the very top. And I’m quite sure they’d love working for you.”

“And there are three of them, these Cambridge Spies?”

“Hmmm,” the Englishman said to himself, his long, elegant fingers stroking his chin as he worked out the different ramifications. He seemed extremely worried. Schellenberg smiled to himself. This meeting was going far better than he could have hoped. Apparently all he’d been hearing about the British giving frosty receptions to Germans only held true when it came to official meetings. When it was unpublicized and without any Americans present, like this one was, they could be quite pragmatic and open about things. This guy was collegial, even friendly. He seemed genuinely interested in what Schellenberg had to say, and once he realized how valuable the stuff was he was being offered, he got downright helpful.

Today’s meeting was one of those professional back-channel things which function best far from the gaze of either the public or government officials. This was the real world, Schellenberg told himself; his proper milieu. That other world, in which those with no imagination preferred to dwell, was really just artifice and delusion. Doenitz, his new Fuhrer, was one such person; a good soldier, but like most military men, too prone to seeing things in black and white, with no understanding at all for gray areas and ambiguities. Well, at least to his credit, he had the sense to send Schellenberg here and let him do his job.

Yes, it was wise to leave some things to the professionals, which is what this Englishman was. His name was Anthony Blunt, a name Schellenberg was already quite familiar with, one of the rising stars of the British Secret Service, and, like himself, a counter-intelligence man. That they’d send Blunt was a good sign that they were taking these overtures seriously and according Schellenberg a requisite level of importance. Not like that poor fool von Friedeburg, forced to surrender to a relative nobody like General Bedell Smith. No, Blunt meant the British were here to deal.

Blunt took his hand away from his chin. He pursed his lips together, then puffing them out the way a bored child might, a bored English child, that is. “Now you know, this is all very nice, General Schellenberg,” he said. “But I really must ask you, what does your Reichsfuhrer hope to get from us in return for this very generous favor?’

Now it was Schellenberg’s turn to appear ruminative. He clasped his hands tightly together, his index fingers pointing upwards like a steeple, touching his lips, fingertips against fingertips. “First of all, he is hoping your organization already recognizes the realities facing Europe at this time. That regardless of all the appearance of good will flowing between Moscow and the West, your alliance with Russia will not last much longer. That for all your best efforts and intentions, conflict will inevitably break out. And when it does, you’re going to need people on your side who have access to information about Soviet intentions and capabilities. ”

“We want you to recognize that, despite all the political propaganda you’ve heard, we are professionals like yourselves. What happened to the Jews was regrettable, certainly, but in all fairness, the responsibility for it should not be laid on our door, but on Hitler’s. I want you to know that Heinrich Himmler never, ever supported the liquidation of the Jews. To the contrary, he opposed it. Many times he confided to me that he regarded any effort to kill off an entire race was sheer folly, if simply for no other reason than the fact that fully two thirds of their population lives abroad. Unfortunately for all, Adolf Hitler proved not to be a reasonable man. Luckily for us all, he is dead.”

Blunt raised his finger. “Really, I do think you’ll find that once everything has blown over…. and yes, yes, the whole thing is regrettable, especially since everyone in the world has by now seen the horrific images. But in the larger view, it is a tragedy that ultimately will be easy to live with. But please, do go on,” he said.

Schellenberg continued. “We also want you and your people to recognize that we can make a unique and decisive contribution to the security of the Western world. He would like to propose a partnership, which for the moment at least, no one else need know about.”

“We would need an enclave of our own, from which we could see to our own internal security requirements. An island or remote estate would be ideal. From there we would be happy to work with your organization and share the intelligence we have on what we are confident shall soon be our common foe.”

Blunt shook his head with a sad smile. “I’m sorry, Herr General, but that would not be an arrangement which my superiors would be able to agree to. The problem is that Mr. Himmler is currently the most wanted man in the world. Everyone in the world is currently hunting for his scalp. What I think would be better is an arrangement that would satisfy all the niceties which the world demands while still allowing your Reichsfuhrer the levels of comfort and privacy which I am sure he would require.”

“Now what I would propose is a sort of custody arrangement whereby the public would be placated by knowing you are in our custody. By doing this we could also ensure that you lads wouldn’t have to worry about being hunted down by some enterprising sorts who, as I understand, expect to find huge caches of gold and other treasures in your Reichsfuhrer’s vicinity. Now if we could report that we had him in our custody, that would force a great many otherwise-motivated parties to call off the dogs. How do you think your boss would feel about that idea?”

Schellenberg frowned as if there was something that troubled him that he couldn’t quite put his finger on. “Custody where?” he asked carefully.

Blunt leaned forward, cupping his fingers around his chin. “Where? Oh…….?” his voice trailed off as if he were exploring that question himself for the first time. Where? Where Where?” He rolled his eyes and arched his eyebrows as he began drumming his fingers upon his chin. “Goodness,” he said sheepishly.

Schellenberg had an idea. “The Swedish government could be convinced to allow us refuge in one of the royal lodges at an undisclosed location. We could be there officially under Swedish custody, but at the same time permitting full British supervision, though I would have to insist on being allowed to run our own on-site security arrangements. But no one would have to know about that. During this time the Reichsfuhrer, myself and others included in this arrangement would submit to full, detailed debriefing.”

“How many people would be included in this scheme?” Blunt asked.

“No more than five,” Schellenberg answered.

Blunt looked surprised. “Is that all?” he asked.

“No, only five,” answered Schellenberg. “There is too much at stake for too many people to know too much about it.”

“I don’t suppose that at this point you’d have any problem telling me who those people would be?” asked Blunt.

“No, I wouldn’t,” said Schellenberg. “There is the Reichsfuhrer, myself, his aides Macher and Grothmann, his medical advisor Gebhardt, my adjutant, Captain Steiner. Oh, and the Reichsfuhrer’s masseur Oberleutnant Loerber.” That makes it seven. Plus of course other support personnel.”

“Support personnel, yes, of course,” agreed Blunt. “No, no, I don’t see any problem with that at all.”

“Kim Philby, a Russian spy.” Blunt shook his head. “Shocking, I must say.”

“Oh, yes, of course. The last man you’d ever think would be red. Same for the others. Shocking.”

Then, suddenly, Blunt was in a big, big hurry to be on his way. There were things that couldn’t wait, a plane to catch. He’d be back in touch, very, very soon. Thank you. Thank you, have a safe trip back to Germany. And he was gone.

Germania was first published by Simon & Schuster in 2008, and is now also available on Kindle here.
Posted by Brendan McNally, author of "Friend of the Devil," and "Germania" at 5:47 PM