The Third Reich certainly had its share of whiz kids and SS General Walter Schellenberg was among the brightest. By the time he was thirty, Schellenberg was already head of all foreign intelligence services in the Third Reich. The fact was, though, that aside from his mastery of gamesmanship and political intrigue, he probably wasn't actually that sharp. Where Schellenberg really excelled was as an indefatigable optimist.

Schellenberg knew the war was lost and that Hitler had to be gotten rid of for Germany to survive. He figured that the man for the job had to be his boss, Reichsfuhrer SS Heinrich Himmler. It was a logical assumption. After all, only Himmler had the enormous power to take Hitler's place. He had a massive private army, the Waffen SS, whose loyalty, when push came to shove, was more towards him that to Hitler. He also sat on top of a vast financial empire that stretched all over the world. Himmler also controlled the police and the intelligence services. He also was in charge of the vast concentration camp system, but in Schellenberg's mind, it wasn't really that big a deal and from his high-level foreign contacts, he'd come to the conclusion that Eisenhower and the rest of the western leadership felt the same way.

All Schellenberg had to do was get Himmler to move against Hitler; to depose him, make him step down, kill him, hand him over to the West, anything would work. If Himmler could do that, then the path was open for a peace agreement, and ultimately a partnership, with the West.  Schellenberg was convinced that the West needed a post-Hitler Germany as a bulwark against Russia and that they were so eager for it that they would see Himmler more for his good points than his bad ones.  All that had to happen was for Himmler to make his move against The Fuhrer. Himmler had the power, he had all the cards. All he had to do was show some backbone, some initiative.

But Schellenberg didn't quite grasp how profoundly incapable Himmler was of independent action.  He simply could not.  Hitler had made him what he was, and Himmler was too gutless to do more than talk about it.  Schellenberg spent more than two years on one peace initiative after another with the West. And each time they failed, precisely because Himmler could not stand up to Hitler and bring up unpleasant facts.  Himmler had risen to his high postition of unbelievable power, strictly because he was incapable of acting on his own.  Taken on Darwinian terms, this is nothing short of fantastic.

But Schellenberg never quite figured any of this out. The breadth of his optimism is truly an awesome thing. Below is an excerpt from my novel GERMANIA that shows Schellenberg at his finest. 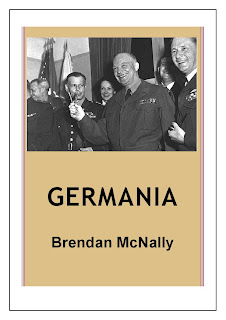 During the flight back from Stockholm, Schellenberg went over and over what he was going to tell Himmler. "The discussions with Count Bernadotte went very satisfactorily, Reichsfuhrer,” he figured he’d start off saying. “He assures me General Eisenhower is receptive to our proposal. The Anglo-Americans are eager to join in an alliance against the Russians.”

Not that Bernadotte had actually said anything of the sort, but Schellenberg, the thirty-year old Head of Foreign Intelligence, needed to get Himmler motivated into moving against Hitler and if fudging a few minor points was what it required, well then so be it.

“The Count said he’d been told by Eisenhower himself that they now consider the Russians a much bigger worry than ourselves. They are absolutely convinced the Russians will turn on them.”

Bernadotte hadn’t said that either. What he’d said was that there was growing nervousness in Allied circles about what would happen with the Russians once Germany was defeated. But Schellenberg was smart enough to know what that meant without having to be told.

“Eisenhower is ready to make a deal, Reichsfuhrer, he merely requires us to make the first move. Until then, his hands are tied.” Of course what Count Bernadotte had actually said was, “This is all very nice, General Schellenberg, but until I get some concrete declaration from the Reichsfuhrer that he is taking over the reins of government from Hitler, nothing I say to Eisenhower will make any difference. There must be immediate action. Force Hitler to step down, arrest him, kill him. How you do it is not his concern. Just get it done.”

That was what Schellenberg really needed to tell Himmler, and perhaps in a perfect world, he would. But he knew from experience how terribly skittish his boss was when it came to things like this. Anything requiring definitive action sent him into one of his massive panic attacks. His stomach would go into spasms and next thing he’d be screaming for Kersten, his Finnish masseur, to come in and take the pain away. Schellenberg didn’t want that to happen this time because Kersten wouldn’t be there. He was supposed to fly back with Schellenberg from Stockholm, but at the last minute he’d made up some excuse and stayed behind. That put Schellenberg in a doubly sensitive situation, since he’d have to force Himmler into making a difficult decision without having Kersten on hand to rescue him.

With a Finnish passport which allowed him to come and go seamlessly, Kersten was the Reichsfuhrer’s secret envoy to Allied intelligence. Schellenberg had flown up with him the day before to see Count Folke Bernadotte, head of the Swedish Red Cross and a member of the Royal Family, who was their intermediary to Eisenhower to explore ways of making a deal to end the war.

Schellenberg and Bernadotte had both agreed that the single best choice for new head of state would have been, hands down, Field Marshall Rommel, the gallant head of the Afrika Korps, who was admired by both the British and Americans and no doubt might have cut a very favorable deal, except of course that Rommel was dead. So Schellenberg proposed his own boss, Reichsfuhrer SS Heinrich Himmler. Initially Bernadotte had his reservations, worrying that Himmler’s position as head of the SS would put off the Anglo-Americans. Then there was the thing about the Jews and the death camps. But Schellenberg kept pushing the idea until the Count finally relented and said, yes, Eisenhower would probably deal with Himmler as long as he could deliver.

So here they were and all that remained to be done was get Himmler to come across. The problem was, for all his icy efficiency in carrying out Hitler’s orders, when it came to thinking for himself Himmler was a hopeless waffler.

What could he tell him that would make him act? “It is the eleventh hour, Reichsfuhrer. It is late, but not too late. The sooner we move, the more we can bring to the table. But we have to move now. Time will not improve our position. You must move against the Fuhrer immediately!”

The other possibility would be to appeal to the Reichsfuhrer’s obsession with the mystical. "This is our supreme hour of destiny, Reichsfuhrer. We are at the threshold of a moment which might not come again for a thousand years.” And even though Schellenberg himself took a dim view of the Reichsfuhrer’s karma-laden ravings, in this case it wasn’t an exaggeration. If Himmler did move boldly, the rift between Germany and the West could be healed in a matter of days. The fact was, even at this late stage, Germany had an awful lot to bring to the table. There were still more than a hundred army divisions, thousands of aircraft and tanks and a populace dedicated to throwing back the Soviet horde. Eisenhower should be able to see the virtue in that.

And of course there were other things they had to sweeten the deal with, things which being also in charge of counter-intelligence, only Schellenberg knew about. There was, for instance, Source Moonpool, their secret network inside Red Army intelligence. Not only were they learning all there was to the Soviets’ intentions, their plans and capabilities, and more importantly, about their intelligence efforts against not only Germany, but the Western allies as well.

In fact, only the day before, Major Steiner, his man running Moonpool, had come to him with information about something he was calling the “Cambridge Spy Ring;” a group of deep-penetration agents whom the Soviets had recruited from Cambridge University during the thirties and who had since wormed their way to the top tiers of British intelligence. Steiner was confident that by the end of the month they would have their names. When Schellenberg thought about what that information might be worth, he got very excited.

Steiner was perfect, except for one thing. He was a homosexual and had found a boyfriend there at SS Headquarters among the Reichsfuhrer’s staff astrologers, and the transcript from a recent random bugging gave Schellenberg reason to believe their pillow talk might be getting too detailed. Once he had finished reporting to Himmler, his next order of business would be to see that that little issue got taken care of.

They started their descent into Berlin. He could hear the hydraulic whine of the aircraft’s landing gear coming down and locking into place. He looked out the window and recognized Templehof Airport’s long curving terminal buildings. A minute later they had landed and were taxiing down the tarmac.
(Excerpt from "Germania")
Posted by Brendan McNally, author of "Friend of the Devil," and "Germania" at 6:26 PM