Ziggy Loerber’s assumption had always been that he’d die at sea. He was a U-Boatman, after all, and that was how U-Boatmen inevitably died. By now the war had gone on for nearly six years and except for Cremer and Luth and a small handful of others, everyone he’d ever known or served with had already found watery graves. They died from enemy depth charges, from bombs and cannon fire. They bled to death, drowned or asphyxiated from acid battery fumes or too much carbon dioxide when the air inside their submarines became unbreathable. They died when their boats sank or when they dived too deep and the water pressure crushed their iron hulls like eggshells.

More recently he’d embraced the idea of dying alongside his shipmates in one massive, glorious, final battle. He’d been given command of U-2514, one of the new ‘miracle’ U-Boats which promised to be everything the old boats were not. Underwater they were extremely fast and yet so quiet that they could run circles around the British and American warships without sonar picking them up. Once they were unleashed, they would sow terror all over the north Atlantic, torpedoing every destroyer, cruiser, frigate and flattop they could find. Of course they’d get killed in the process, but to get to show those British and American bastards what for just one last time would, in their minds, definitely be worth it. 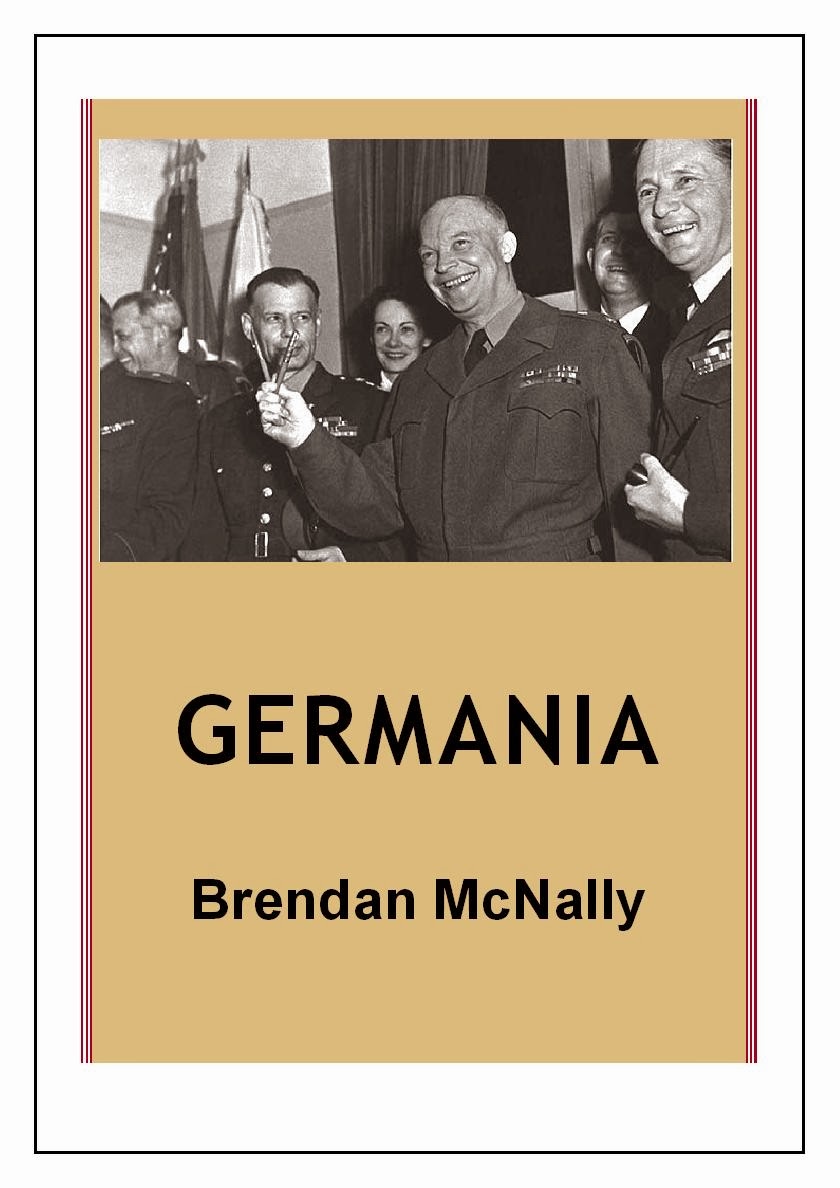 But it didn’t work out that way. Instead, a week after it had been launched, his boat was blown up in an air raid at the shipyard where it sat waiting for its special binary fuel to arrive. Suddenly, without benefit of dying at sea, Ziggy’s career as a sea captain and U-Boat sailor was over. Instead, he and his crew were issued helmets and rifles, put into a Naval Infantry brigade, and sent to defend Hamburg against the British.

For the last two weeks they’d been footsloggers in the vast no man’s land of the outer suburbs, lurking among ruined buildings and burned-out vehicles, waiting for British tanks, trucks, and armored vehicles to pass through and then attacking them with grenades and Panzerfaust rockets.

This morning they had situated themselves in a wide field of bombed-out factories near what had been the marshalling yards for the city’s western train station. Tanks frequently passed through, exploring, but once they ventured just a short distance up any of the side streets, they were lost in a jagged wilderness of wrecked buildings, chunks of walls, and collapsed floors, any of which were perfect places to stage an ambush.

It was nothing like going after enemy ships, Ziggy told himself. A U-Boat is like a wolf, pursuing its prey over long distances. But now Ziggy was more like a crocodile, waiting for its prey to come to it. As a wolf, Ziggy Loerber had been fantastic, but as a crocodile, he was not so good. Ambushes required patience and timing and even under the best circumstances, they easily backfired. In the last two weeks, he’d lost more than half of his men.

Even so, it occured to Ziggy that with a little luck, he might be captured by the Tommies, and then who knows? In a couple of months, weeks, or even days, if he didn’t die of starvation or cholera, they would let him out and send him back to his loved ones. Except of course that Ziggy didn’t have any loved ones, unless you counted his family, which he didn’t. All Korvettenkapitän Zigmund Loerber had was the Navy and it frightened him to think what his life would be like without it.

It was a foregone conclusion that the defense of Hamburg wouldn’t be successful. They had none of the men, the weapons, ammunition, vehicles nor petrol to push the British Army back. They could only hope to fend them off for another day or two. There was a massive seaborne evacuation underway in the Eastern Baltic and each day dozens of freighters, warships and fishing boats arrived with refugees and soldiers escaping from the last German outposts in Latvia and Russia. It was imperative that the Navy keep Hamburg’s port open for them to put in.

So they hung on with whatever weapons and vehicles they could get their hands on. This morning they managed to commandeer some three-wheeled bread trucks and, with a couple crates of Panzerfausts in hand, drove out to the western suburbs. Their war chariots were noisy, underpowered vehicles with engines too small even for most motorcycles. Still, each could carry three people; a driver and two others kneeling on the back bed, with machine guns at the ready. Everyone else followed on foot, rifles slung over their shoulders, keeping a wary eye open as much for townspeople eager to stop the fighting as the British themselves.

As Ziggy sat with his back against a shattered wall, he closed his eyes and let his ears search out among the loose fabric of battlefield noise for the sound of approaching armor. He could hear a metallic clattering in the distance and as he listened closer, he began to make out the rumble and squealing grind of caterpillar treads against broken concrete.

He looked up from the wall to see the high rounded turret of a British Sherman emerging from behind the remains of a factory. He got his binoculars out to get a better look. It was a single tank, painted a brownish green with sandbags piled everywhere along the front below the turret, giving it the appearance of a moving pillbox.

The tank veered slightly to the left, giving him a full view of its side. There was an image painted on the hull. Ziggy tightened the focus on his binoculars. It was a nearly naked girl, busty, with big eyes, short bobbed hair and a garter prominently gracing her thigh. He almost had to laugh. Betty Boop!

For a moment, he was a teenager again, watching American cartoons and serial movies at the Titania Palace or the Cinema Universum. Mickey Mouse, Oswald the Lucky Rabbit, Bosko, and Betty Boop; how he’d loved them all. His brothers despised him for it. To them, his unabashed love of cartoon characters was all the proof they needed that he was brain damaged.

As the tank lumbered forward, Betty Boop seemed to bounce giddily to a rumba rhythm. The tank continued coming closer, and to calm himself, Ziggy started humming, “Who’s afraid of the Big Bad Wolf? Big Bad Wolf? Big Bad Wolf?” He tried to remember whether he’d thought about cartoons at all during his years aboard U-Boats. It sure didn’t seem like it. But now that they were back, it seemed like they’d never been gone. What he’d give for the chance to talk with someone about cartoons. Who knows, Ziggy thought hopefully, staring at the tank. If anyone got out alive, maybe he’d get to.

Betty, Betty, Betty. The real love of his life and in the last ten years, she hadn’t aged a bit. Except now she was adorning a British Sherman and Ziggy wasn’t in a position to play favorites.

He gripped the rocket’s launching tube, holding it like a lance, and stared a hole into his target. That’s it, closer, come closer, a little bit more, a little bit more. He watched it climb over a mound of rubble, pitching its prow upward and, for a brief second, exposing its soft, lightly armored underbelly. Ziggy stood up, pointed the rocket, pulled the trigger and in a hot burst of propellant smoke watched it slam into the flat plate just below the driver’s hatch. There was a rumble, the tank shuddered, and bright plumes of red flame erupted from its different openings. Nobody climbed out. For nearly a minute he stared at Betty Boop burning. Then, turning away, Ziggy signaled his men to move to fresh positions.

Half an hour later, they were hidden along the remnant of a wall, when they heard a familiar rumbling coming from the east. They looked up and to their surprise, saw a lone German tank lurching its way across the moonscape. Something about its movements seemed stalwart almost to the point of being comical, like some self-important businessman trundling through an African jungle with his satchel and umbrella, determined not to let anything stop him from his appointed mission. It had been days since Ziggy had seen any German tanks moving around and he wondered what this single tank’s presence could possibly mean.

But almost as soon as he thought it, the air filled with a ragged, tearing noise that descended down from the sky. Artillery! “Everyone take cover!” Ziggy yelled. The men dropped to the ground just as the shells began exploding. It went on for nearly a minute and then stopped. Ziggy looked up and saw nothing but a dense cloud of dust that hung in the air. The tank was gone, not leaving behind even a smoking, burning carcass. Suddenly Ziggy imagined old Gustav, gloved hand to his top hat and giving a gracious bow, "Thank you, thank you, and now for my next magic trick...”
(Excerpt from Germania, Simon & Schuster, 2008, now also available on Kindle here).
Posted by Brendan McNally, author of "Friend of the Devil," and "Germania" at 4:27 PM