But now this. Captain Frank Hamer, the man who’s been hunting me down, the man who ambushed and killed Bonnie and Clyde like they was dogs, is now on his way to Del Rio; Del Rio, which, in addition to being my own favorite place in creation, my little corner of heaven on earth, it turns out is also his. Well, since I reckon this little corner of heaven ain’t gonna be big enough for the two of us, maybe I should skedaddle before he gets wind of my being here. But is it even possible? If coincidence has led him down here, won’t it do the same wherever I go? Well, maybe it will and maybe it won’t, but Imo have to do something. I can’t just wait here for him to take me.

So then how do I flee? What’s my plan? I look around the diner, at Susie the waitress and the guys on 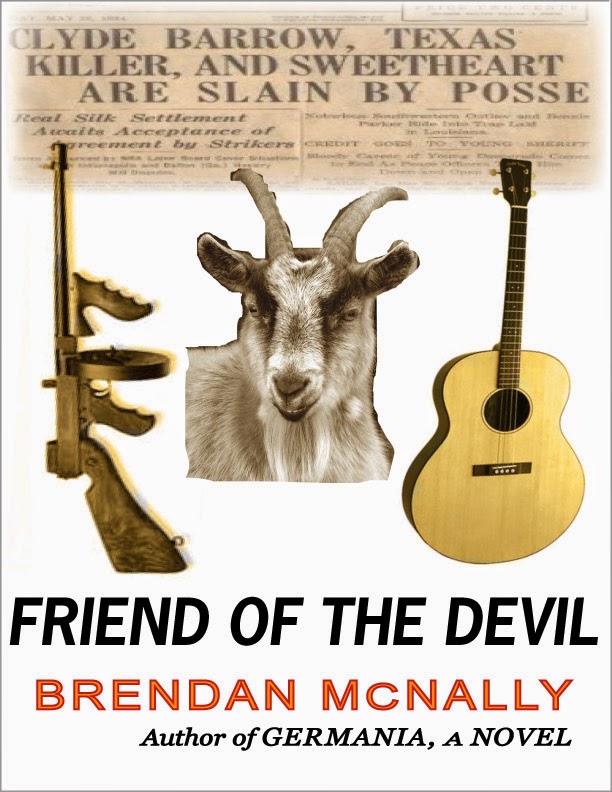 stools at the counter, and a quick look at the clock tells me it’s almost nine thirty, which means I could go back to the rooming house, pack my bags, settle the bill with my landlady, and walk down to the Greyhound station and I’d still have nearly two hours to kill before the noon bus departs for San Antonio. Once there, I know I could get all kinds of lost. Knowing I can do that makes my panic subside some. What’s important now is just to not attract any undue attention, make my departure as invisible as I can. I nod when the waitress comes by with a fresh pot and smile as she refills my coffee.

“You know, Frank coming back!”

Susie looks at me surprised I’m such a dope. “Why, Frank Hamer, Slim!” she exclaims, then laughs and pats my hand. “Can you believe? Hah! I’d forgot that you two never met. Well, you’re in for a real treat, Slim!” She turns to the other customers. “Innat right, boys?”

They all turn in their swivel stools and let out a merry laugh. “Oh, you’re jest going to love Frank Hamer, Slim,” says one, followed by a wave of enthusiastic nods, while the others are all saying, “Yeah!” and, “I can’t wait to see you and him meet, Slim!”

I’m afraid of them seeing my utter horror, so I offer up a weak smile and mutter something bland about looking forward to actually meeting the famous and legendary Texas Ranger Captain Hamer. I say it hoping it might satisfy them and force them to change the subject to something safe, like baseball or FDR.

Susie lets out a cackle that sounds like a nail being pried out of a dry board. “Oh, down here he’s just plain Frank,” she says. “Frank comes to Del Rio to relax, be with his friends and let his hair down a little. He never gets a chance to anywhere else. That’s why he likes it so much here.”

“Besides,” chimes in one of the good old boys on the stools, “ol’ Frank is a whole lot of fun when he wants to be.”

“Yeah,” says another, “he’s always cutting up and wanting a western song. That’s why I just know you two going to get along so well!”

A third one nods vigorously. “I declare, you two gonna be best friends in about a minute.”

No better friend in the whole world than Frank Hamer!”

“You gonna look him in the eye, you shake his hand, and boy, you know you got a pardner for life.”

“Cause that’s the cowboy way!”

And they’re all sitting there smiling at me like a bunch of kids talking about Christmas and not about the meanest, deadliest lawman alive and I’m starting to wonder what in the shit is going on here? Now, I’ve been in the joint and I’ve been in the Marines, so I know how guys will smile at you when they know you’re about to get yours. But this, I am certain, is not that kind of smile. It’s the kind that says they all like me an awful lot and seeing me meet Frank Hamer would be the loveliest, most wonderful thing their little hearts can imagine.

Needless to say, this simply doesn’t make any sense. I’m nothing to them, other than a guy who comes in two or three times a week for a late breakfast. I don’t think any of them have so much as thrown a nickel to me when I play on the street and if any of them have ever listened to my radio program, they sure haven’t mentioned it. Which is all fine, since, like them, I make my money off the tourists. I’m just the latest in a succession of fake singing cowboys with horseshit names like Tex, Slim, Lonesome Dave and Whistling Bob, singing phony cowboy songs while shilling for blood tonics, bowel relaxers, and electric bowties.
(Excerpt from Friend of the Devil, available on Kindle)
Posted by Brendan McNally, author of "Friend of the Devil," and "Germania" at 1:52 PM