Doenitz in the Hour Before His Arrest 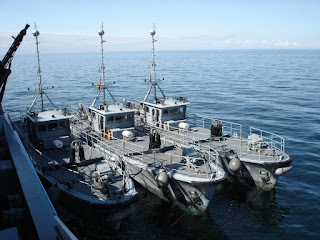 "The way it looked from Doenitz’ window, it could have been any other May morning in Flensburg. The sun was already up, making the water glisten in the bright light. Near the boat dock, a host of seagulls complacently floated on the water, while further out in the harbor, the vast disarray of unmanned destroyers, minesweepers, gunboats and small craft bobbed discordantly from their tethers. For once, it felt like peacetime.

But then a line of turreted, four-wheeled armored scout cars came rumbling down the waterfront, causing the seagulls in the water to irritably flap their wings. About what he’d expected, Doenitz told himself bemusedly. He looked at his watch and saw there were fifteen minutes left. Having the watch on was a mistake, he realized. It should have been packed and sent with the rest of his belongings to his wife. Perhaps he could still give it to one of his men as a gift, rather than let some souvenir-hungry Tommy steal it. But then he thought, to hell with it. Let the bastards have their fun."

Posted by Brendan McNally, author of "Friend of the Devil," and "Germania" at 10:13 AM