One of the more shadowy characters that I encountered while researching my novel on the "Flensburg Reich" was Admiral Hans Georg von Friedeburg. At the time, remarkably little was known about him, even though he played a prominent role in the German Navy up to the time of his death on May 23, 1945. If you go to nearly any high school or courthouse in America today, you will find, framed on the walls, copies of many of the key documents of American History, provided to them by some organization called The Exchange Club. There, among copies of the Constitution, the Articles of Confederation, the Gadsen Purchase, and the Emancipation Proclamation, is a copy of the unconditional German Surrender signed at Rheims, France on May 7, 1945. And there, among all the signatures, is the neat signature of Grand Admiral Hans Georg von Friedenburg . His story is an extremely odd one and is worth telling. 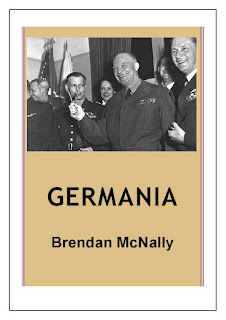 There were three separate German surrenders that marked the end of World War II in Europe. The first was at Luneburg Heath in Northern Germany to British Field Marshal Montgomery. The second was in Rheims, France, to Allied Supreme Commander General Dwight Eisenhower. The third was in Berlin to Russian Field Marshal Konev. Von Friedeburg was the only individual to attend all three. And if not for this, he would be barely a footnote in history. But by being there, his image and face are something anyone who knows even a little about World War II is familiar with.

A day or two after taking over from Hitler, Doenitz sent von Friedeburg to Montgomery to arrange an end to hostilities. Doenitz was under the impression that the grand alliance between the Soviets and the Western Allies was already at the point of breaking up and that we would be amenable to them joining us in a new entente against the Russians.  Von Friedeburg went to Montgomery also expecting he would be treated with a certain amount of gallantry and generosity of spirit as was customarily expected between victor and vanquished. But von Friedeburg was in for a big surprise.
.
Montgomery was probably already known among his fellow Allied generals as being a bit of a prick. By this point in the war, Eisenhower was already sick of him, since Monty.had a way of taking the lion's share of resources while moving a little too cautiously against the enemy. His battles against the more audatious American General Patton were already well known to anyone in the West who could read a newspaper. But it is doubtful that von Friedeburg or anyone accompanying him knew this. It was enough to know that Monty was in charge of all military operations in northern Germany.  The Germans had a massive evacuation operation going on in the Baltic, comparable to what the British had done at Dunquerque in 1940, only much, much bigger.

When von Friedeburg arrived at Monty's TAC HQ, Montgomery went out of his way to be a total prick. Part of this was, of course, his own already-described nature, but the main reason was that, only a few days before, Monty's troops discovered Belsen, one of the Nazi's most notorious death camps. And what they'd seen there so shocked and disgusted them that there was very little gentility left to give to von Friedeburg. Within a very short time after meeting Montgomery, von Friedeburg suffered a nervous breakdown and was soon openly weeping. He briefly went back to confer with Doenitz at Levensau Bridge. Doenitz apparently harshly upbraided him and sent him back to Montgomery to try to negotiate. Montgomery would have none of it and curtly informed von Friedeburg that if he did not immediately sign an unconditional surrender, the truce would end, hostilities would be resumed and he would merrily kill as many fleeing German refugees as he could. He did, however, let von Friedeburg know that he would be willing to turn a blind eye on the German evacuation activities if they would agree to an unconditional surrender. A few minutes later, the surrender was signed and the war in northern Europe had ended.

Having done this, von Friedeburg assumed he would then be allowed to return to Doenitz's headquarters. But it was not the case. He was immediately flown to Rheims to sign another surrender, this time to General Eisenhower. Von Friedeburg had hoped that Eisenhower might be more amenable to his entreaties. After all, Eisenhower was a political general and a world leader and surely he must know what was going on. Besides, Eisenhower was of German origin. But as it turned out, Eisenhower wouldn't even meet with him. He, too, had recently visited German death camps and was at least as disgusted with what he saw as Montgomery. Instead, he sent in his Chief of Staff, General Walter Bedell Smith. For all Eisenhower's reputation as a smiling, likeable nice guy, the reason he could do this was because Bedell Smith, his right-hand man, was an out-and-out bastard, whom fearless warriors like Patton and Montgomery were both terrified of. Bedel Smith was an even bigger prick to von Friedeburg than Montgomery had been. He also demanded a complete and unconditional surrender, this time without any offers of off-the-books accommodations. Then, when von Friedeburg asked they were being treated so ungallantly, Bedel Smith let out a cruel laugh and promptly presented the German admiral with the latest copy of Stars and Stripes, which showed in ghastly detail the atrocities committed at Dachau, Belsen, Ravensbruck, and other newly liberated concentration camps. Von Friedeburg stared in horror at all the pictures of starved, beaten, and mass murdered Jews and he promptly had another nervous breakdown. Bedel Smith suspended the negotiations and sent the Germans off to a guesthouse to stew on it.

The next day, when Bedel Smith summoned them back, von Friedeburg was still so visibly unhinged that Bedel Smith demanded Doenitz send in someone else capable of surrendering. Ten hours later, Colonel General Alfred Jodl arrived. Cool and composed, Jodl also tried to convince the Allies to join up with them against the Soviets. But he was not successful. In the end, Jodl signed the unconditional surrender and von Friedeburg signed after him. Jodl was allowed to fly back to Flensburg to Doenitz's headquarters. Not so von Friedeburg. The Allies still had plans for him. He was taken to Berlin, where he signed a third surrender, this time to the Soviets. By this point, von Friedeburg was mostly in a daze. Finally he was allowed to fly back to Flensburg. For the next two weeks, he continued a kind of zombie existence in the land of the living, but no longer really alive.

The "Flensburg Reich" was often marked by extremely peculiar behavior of its occupants. Von Friedeburg's behavior during this period was mainly listless. Apparently the other Nazis mostly just avoided him. Then, finally, on May 23, the Allies rolled up the whole regime and arrested everyone. Doenitz, von Friedeburg and Jodl were all summoned to the Patria, an old Hamburg-Amerika liner, where the Allied Control Commission was headquartered. There they were tersely informed of their government's liquidation and they were all promptly placed under arrest. They were then escorted back to their quarters to pack their bags. Once there, von Friedeburg asked to go to the bathroom, where he promptly took some prussic acid and killed himself. One of the first people to find his body was the celebrated LIFE Magazine photographer Margaret Bourke-White, who had him taken off the toilet and laid down on a bed, where she photographed him. On the wall behind him, was a framed portrait of Doenitz. This photograph of von Friedeburg was the last entry in a grand LIFE photo essay showing a succession of various top Nazis who'd killed themselves with pictures of Hitler always in the background. It was always the same picture and perhaps through persistence of vision or some other bit of visual trickery, the photograph of Doenitz above von Friedeburg's unhappy corpse seems indistinguishable from them.

As I said, for years and years, I gathered research on the "Flensburg Reich," and though I gathered a lot of information on a lot of people and events, what I had on von Friedeburg never progressed beyond the barest of a barebones outline. I spent years of my life wondering about him and trying to figure out what had gone on in his head during those terrible, humiliating days of surrender. I never found out, but when the time finally came to write my book,  Germania, I simply did the best I could using my imagination. I used him as a sort of literary device. What if he were the one Nazi who through some defect in his personality could not engage in the infuriating denial that all the others did, where they claimed that they didn't know about it or that they were just following orders? What if he were the one who drank deeply of his own guilt so that he wallowed in it, admitted and embraced the implications of his and his nation's awful criminality? In a sense, von Friedeburg became the moral center of my novel, a stark contrast to all the other Nazi leaders who envisioned bright futures for themselves and spent their time in Flensburg trying to disassociate themselves from their unpleasant past.

Soon after I finished and sold the novel to Simon & Schuster, some very telling details of von Friedeburg's life began accreting onto the Internet. That before the war, he had spent a period serving as a naval liaison to Reichsfuhrer SS Heinrich Himmler. Of all the admirals in the German Navy, he was among the staunchest Nazis. He had gotten quite close with both Hitler and Himmler. Then I learned he had a very dark secret. Hans Georg von Friedeburg had a Jewish grandmother. Hans Georg von Friedeburg was a Jew.

(Germania was first published by Simon & Schuster in 2008, and is now also available on Kindle here).

Posted by Brendan McNally, author of "Friend of the Devil," and "Germania" at 6:37 AM