A few minutes later I see this little mom-and-pop grocery store with a Socony Gas sign hanging like a banner from its eaves and two pumps in a little island out front.

I pull up and shut off the motor. The screen door opens and this skinny old guy ambles out in overalls and a beaten-up felt hat. I extract a dollar bill from my pocket and shove it his way. “Fill it up with the cheap stuff,” I tell him. “You got any sandwiches for sale in there?”

“Maw will make whatever you want. Got cold drinks, coffee, too, in paper cups.”

“I thought they was in the south,” I say. “I was hoping to stay out of their path.” 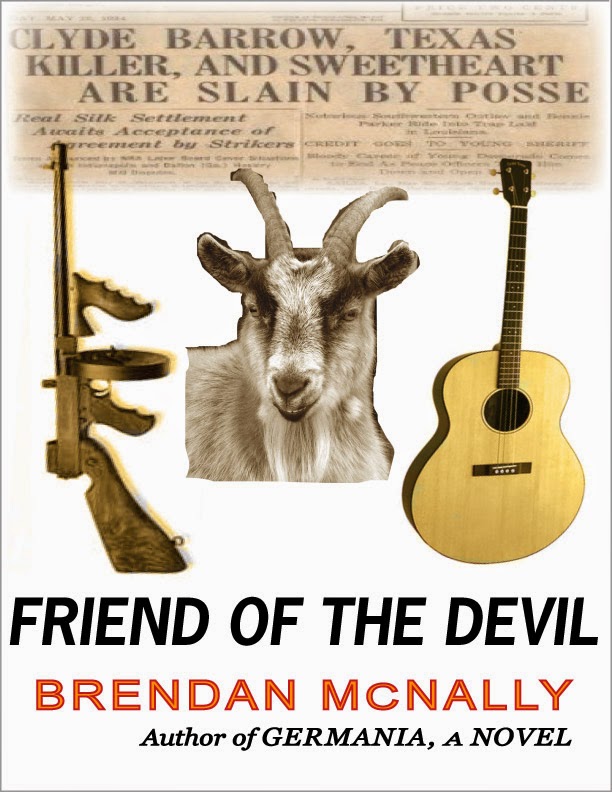 "No, no, they’re supposed to be around here,” he says. “There was a whole bunch of state trooper cars drove through here a little while ago. Somebody stopped just now, said they have a roadblock set up.”

“Which way was they going?”

“Well, I didn’t see anything,” I say and head inside.

The store is a small unlit room lined with shelves full of canned goods and bags of flour and coffee. On one side of the room, there is a bank of glass cases displaying some forlorn-looking cuts of smoked meat, while a heavyset woman in a white apron stands at the ready behind it.

"What for you?” she asks. I order some baloney sandwiches and ask for a Nehi. She points me to a water-filled tin box where a dozen or so capped bottles sit up to their necks in the dark water. “They’re ice-cold,” she says, nodding toward them. I pull one out and bring it to her. She takes a bottle opener and pries off the cap. “You gonna drink it here, otherwise there’s a two-cent deposit.”

"I’ll have it here,” I tell her. She nods like I made a wise choice. She hands it to me and I take a swig. The jolt of cold sugary sweetness hits me like a bomb blast. After all I just been through, it’s an irrefutable reminder I’m still here among the living. I take another long swallow, then I watch her make the sandwiches, laying down three slices of white bread on the wooden counter, then plopping down a slice of baloney on each, followed by another, then another, and then dressing them with dabs of mustard and mayonnaise and covering them with slices of bread, stacking them one on top of another. The woman wipes her hand on her apron, then cuts the sandwiches diagonally. Suddenly I realize how ravenously hungry I am and that if I could, I’d take them right now and gobble both of them down on the spot. But I don’t, because I’m on the lam and best not to do anything quirky that’ll stick in their memories. No, I’m just a quiet, well-mannered city feller who came and went without giving them no never-mind. Instead I start a conversation.

Man says you got the Barrow Gang coming through?”

“That’s what they saying on the radio.”

“Only that they’s in the vicinity, going to effect a rendez-vous with Clyde Barrow’s cousin.”

“Cousin? Didn’t know he had a cousin.”

“Yes, sir. They say his name’s Herbert T. Barrow and that he’s a bad one.”

“Mad-dog killer he is, G-men been chasing him all the way from Knoxville.”

“And they think he’s around these parts?”

“Yes, sir. Me and Paw got our guns ready in case they come here. Don’t want no mad-dog killers coming for me!” She nods at a brace of ancient revolvers lying on the glass countertop on the far side of the room and I think that if old Clyde spotted them there he might laugh, but if they was holding them in their hands, he’d likely kill them both without a further thought.

I finish my Nehi, just as she finishes wrapping up my sandwiches in a sheet of white butcher paper. “That’ll be fifty five cents,” she says.

I dig into my pocket and give her the exact change. She puts it in the till and I go back to where the empty pop bottles are sitting, before I go pick up my sandwiches and leave. Then the bell over the door jingles and the screen door opens. The old guy is standing in the doorway with his hands up. “We got company, Maw,” he says like it’s not a good thing. That’s when I see a tiny woman in a long, gaily colored polka dot dress standing behind him with a double barrel shotgun planted in his back.
(Excerpt from Friend of the Devil, available on Kindle).

Posted by Brendan McNally, author of "Friend of the Devil," and "Germania" at 10:59 AM