Today, the Czech translation of my novel Germania has launched in the Czech Republic and Slovakia, under the title Germanie, from Nakladatelstvi XYZ. Here is a short synopsis of the story. If you'd like to check it out in English, here is the link Germania by Brendan McNally.

It's May 1945. Hitler is dead and the war is suddenly all but over. All the Nazi bigwigs who have managed to get out of Berlin now gather in Flensburg, a small port city in the north where Grand Admiral Doenitz, Hitler's successor, has set up a new "post-Nazi" government. Not knowing anything about politics, Doenitz mistakenly believes his new regime might be acceptable to the Western Allies, whom, he's been told, are now ready to begin fighting the Russians.

Despite the enormity of the defeat they've just suffered, Flensburg is alive with a strange atmosphere of optimism. With Hitler out of the way, the survivors are free to imagine whichever bright futures they fancy. Into this surreal place come Manni, Franzi, Ziggy, and Sebastian Loerber, the singing, dancing, acrobatic (and quite possibly magical) Flying Magical Loerber Brothers. Once the toast of Berlin's cabaret scene, they were so beloved, their Jewishness was conveniently overlooked by everyone, including Hitler. Now they're back, reunited, and out for revenge! 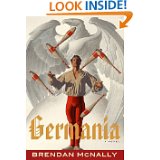 Although it is a fanciful work, in which the paranormal is normal, Germania is historically highly accurate and the product of many years of research and interviews.

Brendan McNally had been a journalist at the Pentagon in Washington before coming to Prague in 1992. He was a reporter for the Prague Post, Defense News, and the New York Times and was part of an informal club of local reporters who often worked together to investigate arms sales and government corruption.

Brendan McNally divides his time between Dallas and the Czech Republic. He is currently working on a novel about Martha Dodd, the Cold War Soviet spy, whose 30-year exile in Prague ended shortly after the 1989 Revolution.
Posted by Brendan McNally, author of "Friend of the Devil," and "Germania" at 10:27 AM