The Only Honest Lawman in Texas 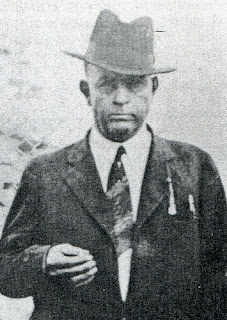 I have to confess that I've never actually seen the movie Bonnie and Clyde. I've seen chunks of it, including the ending, never the whole thing from beginning to end. But I've read a good deal about it and have no doubt that the crtics are correct. The film is a masterpiece. It is a great bit of visual story-telling and it probably tells a profound truth about young desperadoes who endeavor to live fast, die young and leave bullet-riddled corpses. It just doesn't tell the actual story about Bonnie Parker and Clyde Barrow.

We in Texas are used to Hollywood taking extreme liberties with our history. Heck, we're a state of such inveterate bullshit artists, we bring most of it upon ourselves. And recognizing this about ourselves, we're generally willing to cut Tinseltown some slack on this. But the movie Bonnie & Clyde seriously pissed some people off in Texas for its portrayal of Captain Frank Hamer, the Texas Ranger who led the party that hunted down and ultimately bushwacked Bonnie and Clyde.  It portrayed him as a bumbling goober who got captured and held hostage by them for a while.  That was a fabrication which many in Texas simply could not abide in. That's because Frank Hamer was neither bumbling nor a goober nor someone who would ever allow himself to be taken prisoner.  Frank Hamer was an exceedingly tough, scary hombre. During his long career, which started in the earliest days of the Twentieth Century and continued on until 1948, he probably shot and killed at least fifty bad guys. He was himself shot and left for dead five or six times.  He spoke little, was by all accounts unfailingly honest and his skills as a tracker and hunter of men were honed from growing up on the wild Texas frontier of the late 19th Century.

Hamer told few about his life, but one of the things he did admit to was that he very nearly embarked on a life of crime as a cattle rustler.  But at the last moment he changed his mind and soon after was invited to become a Texas Ranger.  Of course, this was at a time when the Texas Rangers weren't considered necessarily all that honest themselves. A lot were political appointees of crooked governors, of which we've had many.  But Hamer was honest and not someone to be trifled with.  He was revered for his toughness and his honesty and this did not make him popular with every governor that he served under.  A couple times he quit and went to work for Colonel Edwin L Simmons at the Bureau of Prisons.  There had been a breakout from Eastham Farm, engineered by the recently-released  Clyde Barrow.  Simmons ordered Hamer to hunt down the Barrow Gang and bring them to justice.

Hamer spent months driving around parts of Texas and Louisiana and learning about the Barrow Gang's habits.  He visited countless roadhouses and talked to informants and then he gathered up a posse and after cutting a deal with the father of a Barrow Gang accomplice, set up an ambush, using the father as the unwilling bait. The fact that he was planning to kill a woman didn't seem to bother Hamer that much.  He apparently referred to Bonnie as a "female dog."  One of the people in his Barrow Gang ambush party was a Dallas sheriff's deputy named Ted Hinton, who'd known Bonnie fairly well, when she was a waitress in a Dallas cafe where he often ate. He'd known Clyde as well a few years before that. Whatever personal feelings Ted Hinton may have had for them, he was able to put them aside and kill them when the time came.

It was an ambush. For a number of years, the ambushers maintained the fiction that Bonnie and Clyde had been given a chance to surrender, but it was a lie. It was a massacre.

Hamer was celebrated as a hero.  There is a good chance he may have split whatever money they recovered with the local cop who'd joined the ambush party. Hamer certainly did keep all the weapons which the two outlaws had with them and sold them off.  He was still a hero. He did what had to be done and he did it in a merciless and methodical manner.

After that Hamer stayed out of the limelight.  But then fourteen years later, in 1948,  he strapped on his holster and went after another criminal,  this time in the streets of Alice, Texas.  The crime in question was the stealing and stuffing of ballot boxes in a US Senate election. He faced down the criminal on the streets and if only the standoff had turned into a shootout, the history of the world would probably have been completely different.  The criminal in question was one overly ambitious young congressman name Lyndon Baines Johnson. The ballot box he'd stolen and switched with one he'd stuffed allowed him to win the senate election by a margin of a mere 48 votes.  Five years later, the junior senator from Texas was the Senate Majority Leader and one of the most powerful politicians in American History.  Fifteen years after that, Lyndon Johnson was President and captain of the American Nation's disastrous course into the Vietnam War, which we've yet to fully recover from.

If only Hamer had gotten to gun down one more bad guy!

Frank Hamer is a major character in my novel, Friend of the Devil. I've taken a few liberties with him myself, but I've tried very hard to stay faithful to the character as I understand it. Bonnie and Clyde are in there, as well, and I would have to say I think I nailed those two young snakes pretty accurately.


Posted by Brendan McNally, author of "Friend of the Devil," and "Germania" at 1:43 PM